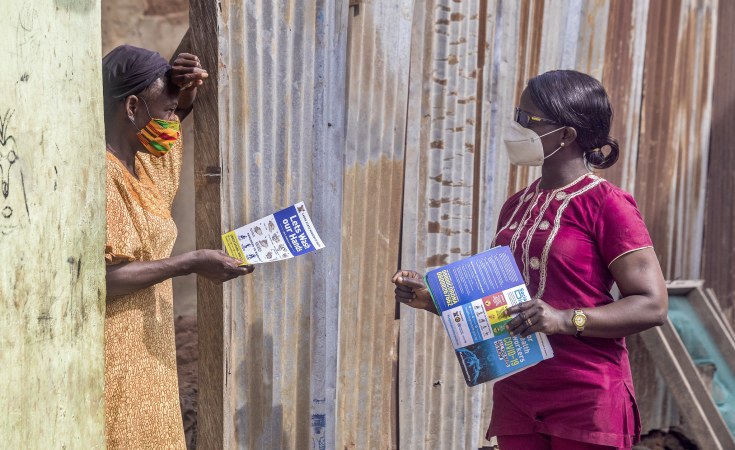 There is now “consistent evidence” that the Omicron variant is outpacing Delta, as COVID-19 continues to account for around 50,000 deaths worldwide every week, said the head of the World Health Organization (WHO) on Monday.

Tedros Adhanom Ghebreyesus told journalists at WHO Headquarters in Geneva that it was also more likely that people who have been vaccinated, or recovered from the virus, could be infected, or reinfected.

“There can be no doubt that increased social mixing over the holiday period in many countries will lead to increased cases, overwhelmed health systems and more deaths”, he said. “All of us are sick of this pandemic. All of us want to spend time with friends and family. All of us want to get back to normal.

“The fastest way to do that is for all of us – leaders and individuals – to make the difficult decisions that must be made to protect ourselves and others.”

He said delaying or cancelling events, was the responsible thing to do: “An event cancelled is better than a life cancelled. It’s better to cancel now and celebrate later, than to celebrate now and grieve later.”

More than 3.3 million people have lost their lives to COVID-19 this year – more deaths than from HIV, malaria and tuberculosis combined in 2020, and Africa is now facing a steep wave of infections, driven largely by the Omicron variant.

“None of us want to be here again in 12 months’ time, talking about missed opportunities, continued inequity, or new variants”, he said, hammering home once again, that for the pandemic to end in 2022, “we must end inequity, by ensuring 70% of the population of every country is vaccinated by the middle of next year.”

Around the world, WHO is working with countries to restore and sustain essential health services disrupted by the pandemic, said Tedros, and according to new data released this year, 23 million children missed out on routine vaccines in 2020, the largest number in over a decade, increasing risks from preventable diseases like measles and polio.

Progress is still being made in many other areas of healthcare and medicine. Five countries were able to introduce the human papillomavirus vaccine (HPV) to prevent cervical cancer, and a further 9 are planning to introduce it over the next 6 months, and in September, WHO launched a global road map to defeat meningitis by 2030.

The pandemic has also caused setbacks in the agency’s efforts to defeat the world’s leading infectious diseases, with an estimated 14 million more malaria cases and 47 thousand more malaria deaths in 2020, compared to 2019.

“However, WHO certified two countries – China and El Salvador – as malaria-free this year, and a further 25 are on track to end malaria transmission by 2025”, he reminded journalists, and this year, WHO also made an historic recommendation for broad use of the world’s first malaria vaccine.

Services for noncommunicable diseases have also been hit, with more than half of countries surveyed between June and October, reporting disruptions to services for diabetes, cancer screening and treatment, and management of hypertension.

Summing up a tumultuous year, Tedros also noted that several important steps have been taken to strengthen the global health architecture, and WHO itself.

“We launched the WHO Hub for Pandemic and Epidemic Intelligence in Berlin; We broke ground on the WHO Academy in Lyon; We established the WHO BioHub System”, he said. In early December, Member States agreed to negotiate the world’s first new agreement on pandemic preparedness and response.

“We have also taken decisive steps to address instances of sexual exploitation and abuse, and to make sure that our people meet the high standards that we, and our Member States, expect of them”, he said, following shocking revelations of alleged abuse committed by some WHO staff during the deadly tenth Ebola outbreak in the Democratic Republic of the Congo.

“2022 must be the year we end the pandemic”, said Tedros, but to prevent a future disaster on the same scale, all countries must invest in resilient health systems, built on primary care, and with universal health coverage as the goal.

“When people can’t access the services they need, or can’t afford them, individuals, families, communities and entire societies are put at risk”, argued Tedros.

“In the year ahead, WHO is committed to doing everything in our power to end the pandemic, and to beginning a new era in global health – an era in which health is at the centre of every country’s development plans.”