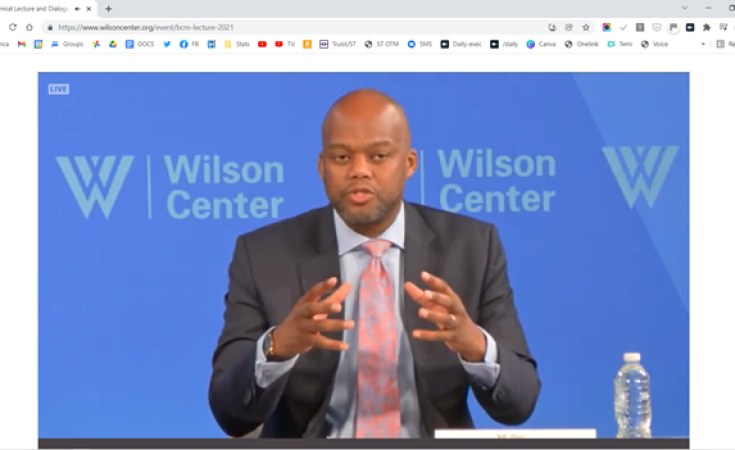 “Africa imports excessively from the rest of the world, manufactures exceedingly too little and hence trades too little,” Wamkele Meme,  who heads Africa’s free-trade agency, said during a visit to Washington, DC last week.

“Africa is increasingly being left behind by the rest of the world in virtually all aspects except poverty and despair,” he said told a gathering at the Wilson Center, adding that only 18 percent of trade on the continent is between Africa countries.

Meme, who was elected the first secretary-general of the African Continental Free Trade Area Secretariat in February 2020  was born in Uitenhage, South Africa and is a graduate of Rhodes University with masters degrees from the School of Oriental & African Studies and the London School of Economics and Political Science.

“Africa cannot be the raw material producing and exporting economy of the past if it is to achieve the economic transformation required for prosperity and to generate the jobs for its youthful population,” he said in the Wilson Center lecture. “Africa is less industrialised today, than it was in the 1970s,” with manufacturing contributing 10 percent to Africa’s GDP compared with 15% in the 1970s, he said.

“For too long, the character of Africa’s economy has been: smallness of national economies, a fragmented continental market, lack of economies of scale, a shallow productive capacity and a continued over reliance on the export of primary commodities,” he said. “All of this resulting in what I refer to as a colonial economic model.”

“Africa intends to reverse this historical anomaly,”  he told the Thunderbird School of Global Management . Free trade can “provide a necessary economic boost to African economies, increasing employment opportunities and incomes, and accelerating growth,” he said.

His agenda during the three-day visit included a Diaspora Roundtable convened by the U.S. government initiative Prosper Africa and the African Union Mission to the United States and a State Department meeting with
Under Secretary for Political Affairs Victoria Nuland and other officials. He was also received by the U.S. Trade Representative, Ambassador Katherine Tai.

“The U.S. is committed to rebuilding our relationship with the African continent, Tai tweeted after the meeting with Meme “to discuss ways to further investment in the continent and to promote improved opportunities for women and youth.”

Although the AfCFTA agreement was formally launched by the African Union at the beginning of 2021 – following a Covid-19 delay – implementation is stalled while work continues to finalize agreement on trade protocols and rules for dispute settlements, Memo said. Addressing criticism that the agreement has failed to deliver promised results, Meme said he expects that negotiations will be finalized soon, despite the complications caused by the pandemic.
“Almost 90% of the rules of origin have been agreed with the remaining 10% to be completed in the next few months,” he said.

“The AfCFTA has immense potential to spur economic growth and transform the continent’s development prospects if additional measures are taken to realize and fairly distribute its many potential benefits, as these gains will not come automatically”, UNCTAD Secretary-General Rebeca Grynspan said in releasing UNCTAD’s Economic Development in Africa Report 2021 on 8 December.

To achieve inclusive growth, the report concluded, trade promotion must be pursued along with increased investment and accelerated infrastructure financing ” that facilitates rural-urban linkages and providing equal access to socioeconomic opportunities and productive resources.”

A recent survey found widespread optimism that the AfCFTA will boost both trade and growth. Research gathered from executives from 46 countries by the Pan-African Private Sector Trade and Investment Committee (PAFTRAC) found that 87 percent are confident that the agreement will boost intra-African trade. Most executives are confident that their businesses will grow in the next year and a majority are optimistic about the prospects for their industry, the survey found.