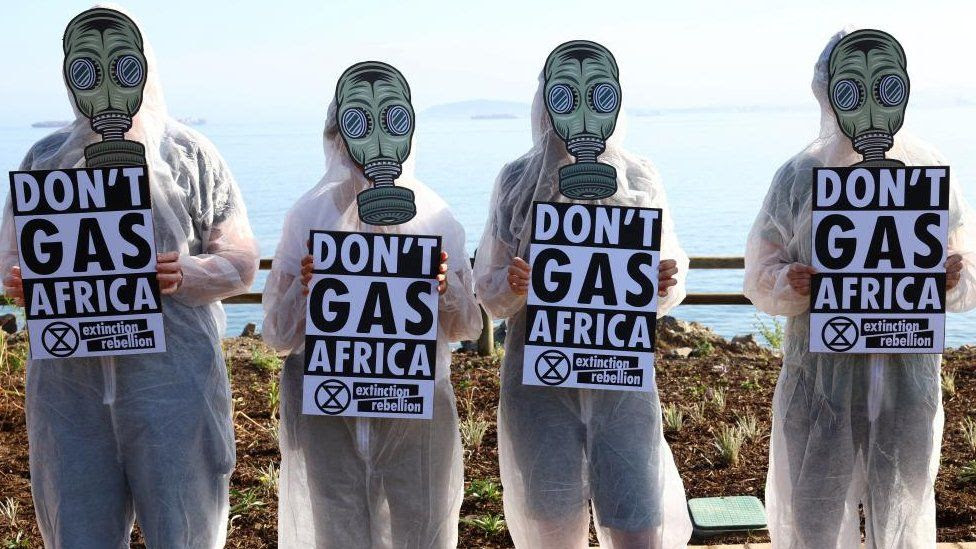 Africa’s natural resources are at the heart of a heated debate about how to balance economic growth and tackle global warming.

At the current COP27 negotiations in Egypt, dubbed by some as the “African COP”, the continent’s leaders are trying to get support and funding to tap into Africa’s vast gas reserves, arguing that gas is less polluting than alternative fossil fuels such as coal and oil. This argument has already been endorsed by the European Union.

African leaders argue that their countries need to exploit their reserves to help generate electricity and make it available to millions of their people who lack access to the grid. They also want to increase exports to Europe, where many countries are looking for an alternative to Russian gas.

They argue that Western countries benefitted from dirtier fossil fuels so Africa should not be prevented from exploiting its cleaner natural gas in order to raise living standards on the continent.

But climate campaigners and delegates from low-lying islands have said this will lock Africa into using fossil fuels for many years and make the crucial goal of slowing the global temperature rise more difficult.

They say the continent should embrace renewable energy instead, pointing out that Africa has 60% of the world’s solar power potential but only 1% of global installed solar capacity is on the continent.

“Fossil fuels must be phased out; they must be kept in the ground. Africa’s backyard will not become Europe’s forecourt,” Greenpeace Africa said in a statement.

Its spokesperson Mbong Tsafack said the push by the African delegations for support and funding to exploit their gas reserves has happened mainly on the sidelines of the COP27 talks.

“The deals that are being negotiated are generally with companies from the global north,” he told the BBC.

However, African officials insist that they have the right to exploit their resources and say their COP27 negotiators have been given the authority to reject any deal that forces them to decarbonise if it jeopardised the continent’s future development.

Any deal at COP27 should reflect the right of African countries to use their natural gas reserves, Reuters has quoted the president of the African Development Bank, Akinwumi Adesina, as saying.

The 2015 Paris climate agreement created the goal of limiting the global temperature rise above pre-industrial levels to well below 2C and strive for 1.5C to avoid dangerous climate change.

The world has already warmed by 1.1C and climate change impacts – many of which are being felt in Africa – are accelerating and becoming more frequent.

This is why campaigners like Mohamed Adow from Power Shift Africa do not want to see new gas fields opened up in Africa. He blames a “powerful cabal of fossil fuel companies” along with “African elites” for the push to exploit gas.

“This would clearly be a disaster for the planet, but also for Africans, who make up some of the most acutely impacted victims of climate change.”

Negotiators for some African governments say they are very much aware of the needs of their people.

“African states’ priority now is to reduce poverty and not to save the planet,” said Tosi Mpanu Mpanu, lead negotiator for the Democratic Republic of Congo.

“When only 10% of our population has access to electricity what energy transition [to clean energy] do you expect them to make?

“First we need to make electricity accessible for 90-100% of our people, then we can think of energy efficiency, green energy and making the transition to renewables.”

Another senior African negotiator, who did not want to be named, said no country in the world would leave their energy resources unutilised.

“Even developed countries are returning to fossil fuels and if they criticise us, that is double standard.”

More than 5,000 billion cubic metres of natural gas resources have been discovered to date in Africa, according to the International Energy Agency (IEA).

Sixteen African countries have significant gas reserves, with four of them – Algeria, Angola, Nigeria and Mozambique – holding 60% of the total.

“With the European Union aiming to halt Russian gas imports towards 2030, Africa in principle could supply an extra 30 billion cubic metres in 2030,” says the IEA’s Africa Energy Outlook 2022 report.

Mozambique exported gas to Europe for the first time this week and climate activists have accused European countries of “cashing in on the fossil fuel in Africa for their immediate gain”.

One of the main arguments of African negotiators pushing for climate finance to tap gas reserves has been that gas is a much less polluting fossil fuel than coal and oil.

“How can you condemn Africa for pursuing gas?”

The continent at present accounts for around 4% of total global emissions.

Western countries have been promoting gas as a transitional fuel for their net-zero carbon emission targets.

Scientists however say gas can be a major source of methane, a greenhouse gas that has 80 times more warming power than carbon dioxide, the world’s major source of emissions.

So it will be a tall order to persuade delegates, especially those demanding an end to all fossil fuels, to agree to back Africa’s dash for gas.