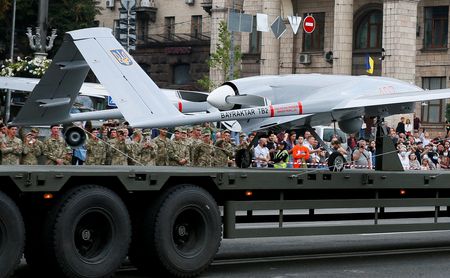 ISTANBUL/ADDIS ABABA (Reuters) – U.S. authorities have taken issue with Turkey over its sales of armed drones to Ethiopia, where two sources familiar with the matter said there was mounting evidence the government had used the weapons against rebel fighters.

Washington has “profound humanitarian concerns” over the sales, which could contravene U.S. restrictions on arms to Addis Ababa, a senior Western official said.

The year-long war between Ethiopia’s government and the leadership of the northern Tigray region, among Africa’s bloodiest conflicts, has killed thousands of civilians and displaced millions.

A State Department spokesman said U.S. Horn of Africa envoy Jeffrey Feltman “raised reports of armed drone use in Ethiopia and the attendant risk of civilian harm” during a visit to Turkey last week.

A senior Turkish official said Washington conveyed its discomfort at a few meetings, while Ethiopia’s military and government did not respond to detailed requests for comment.

Turkey, which is selling drones to several countries in Europe, Africa and Asia, has dismissed criticism that it plays a destabilising role in Africa and has said it is in touch with all sides in Ethiopia to urge negotiations.

Last week the United Nations agreed to set up an independent investigation into rights abuses in Ethiopia, a move strongly opposed by its government.

Tigrayan rebel forces said on Monday they were withdrawing from some northern regions after government advances and, in a letter to the U.N., called for a no-fly zone for drones and other hostile aircraft over Tigray.

The U.S. State Department clamped down in May on exports of defence products for Ethiopia’s armed forces.

In September, the White House authorised sanctions on those engaged, even indirectly, in policies that threaten stability, expand the crisis or disrupt humanitarian assistance there, though there has been no indication of any such imminent action against Turkey.

The U.S. Treasury, which has broad economic sanctions authority under that executive order, declined to comment on whether sanctions could apply to Turkey.

The senior Turkish official said the foreign ministry examined how the drone sales might impact U.S. foreign policy as part of 2022 budget planning.

“The United States has conveyed its discomfort with Turkey’s drone sales …but Turkey will continue to follow the policies it set in this area,” the person told Reuters.

A second senior Turkish official, from the defence ministry, said Ankara had no intention of meddling in any country’s domestic affairs.

Turkish defence exports to Ethiopia surged to almost $95 million in the first 11 months of 2021, from virtually nothing last year, according to Exporters’ Assembly data.

Ethiopian government soldiers interviewed by Reuters near Gashena, a hillside town close to the war’s front, said a recent government offensive succeeded following an influx of reinforcements and the use of drones and airstrikes to target Tigrayan positions.

A foreign military official based in Ethiopia said satellite imagery and other evidence gave “clear indications” that drones were being used, and estimated up to 20 were operating. It was unclear how many might be Turkish-made.

“Surveillance drones are having a greater impact …and being very helpful,” the person said, adding the guerrilla-warfare nature of the conflict made armed drones less useful.

Asked whether foreign countries had also supplied drone operators, the official said: “I know Turkish personnel were here at one point.”

Turkish and Ethiopian officials have not publicly confirmed the drones sale, which Reuters first reported in October, and Turkey’s foreign ministry did not respond to a request for further details.

Ethiopia has also bought drones from the United Arab Emirates, which did not respond to a request for comment about possible U.S. concerns. Feltman was also scheduled to visit the UAE earlier this month.

Under President Tayyip Erdogan, Ankara has poured military equipment into Africa and the Middle East, including training of armed forces in Somalia, where it has a base.

The Turkish military used its Bayraktar TB2 drones last year with success in Syria, Libya and Nagorno-Karabakh, prompting interest from buyers globally in a market led by U.S., Chinese and Israeli manufacturers.

In October, a Turkish foreign ministry spokesman said Ethiopia was free to procure drones from anywhere. Foreign Minister Mevlut Cavusoglu said last week that engagement with Africa was based on mutual benefit.

NATO allies Washington and Ankara have strained ties over several issues including the Turkish purchase of Russian missile defences, and U.S. support for Kurdish fighters in northern Syria.

The State Department spokesperson said Feltman had underscored that “now is the time for all outside actors to press for negotiations and end the war” in Ethiopia.

The Western official, who requested anonymity, said Ankara had responded to U.S. concerns by saying it attaches humanitarian provisions to the Ethiopia deal and requires signed undertakings outlining how drones will be used.