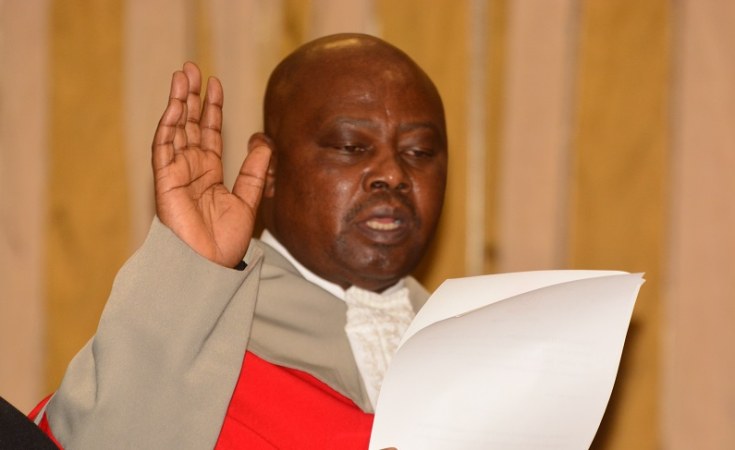 Two advocates of the Lesotho High Court, involved in a high-profile treason and murder trial, have become the latest to experience torture, death threats and other ill-treatment at the hands of the local police. As Carmel Rickard explains, reference to their experience was made by Chief Justice Sakoane Sakoane in an extraordinary judgment refusing to recuse himself from presiding over the trial.

In his decision he was scathing about the behaviour of the country’s Director of Public Prosecutions, and her colleague, controversial South African advocate and former prosecutions boss, Shaun Abrahams. He laid out their behaviour and its potential for further delaying the start of the trial, mentioning that the two advocates had not been in court on a certain day because one was recovering from police torture and the other was in hiding from police death threats. However, alarming as these two incidents may be, they are just the latest examples of police brutality, an ongoing problem in Lesotho. There could be a difference this time though: the police targeted counsel and so the issue is back on the radar of the Chief Justice, known to be a strong opponent of such behaviour.

It comes as a shock to read a judgment by no less a person than the Chief Justice of Lesotho, and find him stating as fact that an advocate who should have appeared in court before him on a certain day, did not do so because he was recovering from torture at the hands of the country’s police.

A second advocate was said by the Chief Justice, Sakoane Sakoane, to have been absent from the same court session because of police threats against him.

But that is an indication of the growing problem of police brutality, often amounting to sheer lawlessness, in Lesotho.

The reference to police treatment of counsel emerged last week, when the CJ delivered a hard-hitting decision in response to an application that he recuse himself from presiding in a high-profile murder and treason case.

The recusal application was brought by the Director of Public Prosecutions, Hlalefang Mary Motinyane. She said that she brought the application because the CJ ‘has not and will not bring an impartial mind to bear’ on the case. Justifying her application, she gave an account of what had happened in court when the trial of former Lesotho defender force commander, Kenney Kamoli, and five others, resumed on 10 January.  I

In his judgment on the recusal application, the CJ made scathing comments about the behaviour of both Motinyane and the lead prosecutor handling the case, Motinyane’s controversial former South African counterpart, Shaun Abrahams.

He explained his decision to bar Abrahams from further appearance in the case, and said that there was no reason for him (the CJ) to stand down.

He said Abrahams had absented himself from court, without permission from the court, and had ‘double booked’ (been involved in another case at the same time). He had done so, said the CJ, after originally committing to the trial dates of 10-21 January, fully realising ‘that double-booking is a sanctionable professional misconduct.’

Much of the CJ’s judgment and its findings was placed in the context of the Speedy Court Trials Act, under which an entire trial could be ‘dismissed’ by a court if it found that the prosecution improperly delayed the start of a case. The law also allows the court to bar a prosecutor from appearing in a case if there has been double booking that contributes to delays.

When Abrahams was absent from court on 10 January, and another member of the prosecution team asked for a postponement, the CJ warned of the possible consequences, under the Speedy Court Trial Act, should the application be unsuccessful. Counsel then immediately withdrew the postponement application.

The CJ also made it clear that, in her application for his recusal, the DPP was basing her reconstruction of what had been agreed to in relation to dates and counsel’s appearances, on what Abrahams had told her, rather than on what the record disclosed.

Given the extraordinary nature of this judgment and its serious findings against Lesotho’s top prosecuting officials, as well as the high-profile trial itself, with prominent former members of the military among the accused, it would be understandable if a reader missed the CJ’s reference to police torture in the judgment.

It came in the course of his decision, when the CJ explained that on 10 January there had been a postponement until 14 January to allow counsel for one of the accused to bring an application to quash his indictment. However, said the CJ, ‘Unfortunately, argument on that day was not heard because of the absence of two defence lawyers, Mr Mafaesa and Mr Letuka, who had been tortured and threatened respectively by the police.’

Although that was the only reference to the police detention and torture of Mafaesa, a prominent human rights lawyer, in the CJ’s decision, he has in fact dealt with it on other occasions.

When Mafaesa’s detention and torture were raised in court to explain his non-appearance, the CJ responded angrily and asked what the DPP was doing about the police torture, saying they should immediately be prosecuted.

He also asked why the Lesotho law society had merely ‘negotiated’ with the police over Mafaesa, writing a letter to the police commissioner, instead of bringing court action against the police.

In the case of Mafaesa’s colleague, Kabelo Letuka, he was threatened with death by police after he filed an urgent application against the police for Mafaesa to be brought from detention to court. Letuka then went into hiding.

Local media report Letuka as saying that he still did not feel safe, even after the High Court issued an order against the police that barred them from mistreating him in any way.

Mafaesa, who was treated in hospital after his release, confirmed his unlawful handling by police and commented: ‘Sometimes human rights lawyers get to taste the same medicine given to your clients.’

Mafaesa was arrested by police after a client, interrogated and tortured by police in relation to a robbery charge, falsely implicated Mafaesa to get the police to stop their torture. The police wanted to know the whereabouts of the gun used in the robbery, and the client said that he had given it to Mafaesa.

Speaking after his release, Mafaesa said that his client had been tortured before and that he (Mafaesa) had obtained a court order against the police, barring them from doing so again. Armed with this court order, he took his client back to the police who were looking to arrest him again. However, the police did not heed the order, and repeated their assaults.

These incidents of police brutality are just the latest in a long history of similar behaviour in Lesotho. Despite strong words from the courts and high damages awards made against the police, the unlawful interrogation methods have not stopped.

The latest incidents, in which two advocates were directly affected, seems to have raised the ire of the CJ, well known to be strongly opposed to police brutality. Whether he will be able to find a way to hold the police to account this time, remains to be seen.