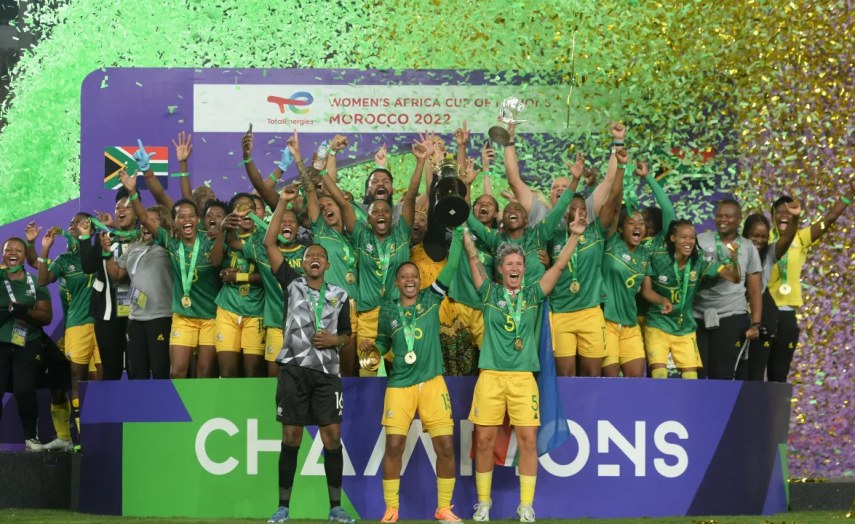 In the 22 years since their last participation, Morocco have clearly stored up heaps of luck among the football gods.

The hosts of the 2022 women’s Africa Cup of Nations didn’t need much of it during the group stages where they beat Burkina Faso, Uganda and Senegal.

And in the quarter-finals, they were – as Botswana coach Gaoletlhoo Nkutlwisang freely admited – tactically and technically superior to the southern Africans.

That victory gave them a place at the World Cup for the first time.

And their good fortune was on full show in a pulsating semi-final when – starting to feel the heat from a hitherto underperforming Nigeria side – the defending champions went schizophrenic switching between abdication mode and defence of the realm.

With two players dismissed for straight red cards, cussedness preceded the fall in a penalty shoot-out in front of a record attendance of 45,562.

The nine Nigerians who held off Morocco for the best part of an hour were unsurprisingly hailed as heroic.

Coach Randy Waldrum, who said he was proud of their exploits, may face the sack for failing to lead the country to a 10th Cup of Nations trophy.

But it would be difficult to fault him for the incompetence of not one but two experienced players.

After Halimatu Ayinde’s thuggish stamp on Rosane Ayella’s heel, Waldrum would be at liberty to question quite what was going through Rasheedat Ajibade’s head when she replicated Ayinde’s viciousness on Zineb Bedouani’s heel.

Even with a two player advantage, Morocco could not break down Nigeria. “We lacked a little lucidity with the final pass,” said Morocco boss Reynald Pedros after the penalty shoot-out in front of 45,562 fans – a record for a match at a WAFCON.

Ayella conceded that the switch in expectations following the two departures had frazzled the thinking on the pitch.

But they regained their composure and were all cold-blooded during the shoot-out, especially Ayella who was held up with procedural explanations by the referee Maria Rivet just before the fifth penalty.

No icing on the cake then for Morocco at the first Cup of Nations tournament to feature 12 teams.

But a feel good factor that creates the environment to ask justifiably for much more.

That it has taken three decades for the tournament to move from eight to 12 highlights the lack of investment in the women’s game among the 54 associations that comprise the Confederation of African Football (Caf) which organises the Cup of Nations.

Tellingly, the prize money for the 2022 tournament doubled from the 2017 fest to 16 miillion euros.

With the winnings being cumulative following a 600,000 euro payout for reaching the tournament, the victorious side could haul just over two million euros into the national team coffers.

WAFCON remains a waif by comparison. South Africa’s Banyana Banyana – as they are nicknamed – will take home 500,000 dollars, a significant increase over the 2018 payday of 200;000 dollars for Nigeria

But still some way off their European sisters. “It’s impossible to compare Africa and Europe,” said Meskerem Goshime, one of the senior executives at Caf overseeing the development of the women’s game in Africa.

“Firstly, when we talk about the Cup of Nations, it’s a celebration of African women’s football and we need to take it as that.

“It’s where the strong nations come and compete and it’s a chance to introduce and rebrand women’s football. It’s where we say we are here.”

Even at the first tournament to parade 12 teams, there were calls for expansion.

Members of the technical study group (TSG) – the panel which looks at styles of play during the competition – called on the Caf chief Patrice Motsepe to move towards 16 teams within four years.

“The Cup of Nations is the big chance. It’s the tournament where players and coaches can get new opportunities,” said Jacqui Shipanga, who coaches the Namibia women’s team.

“I’m not saying 20 or a 24-team tournament – let’s stick to 16 and that would be a great legacy for the current leadership of the Caf.”

That was hardly suprising because her side lost to Nigeria on aggregate during qualifiers for the tournament which were arranged on a regional basis for the 2022 competition.

That move to a larger format will be organic, Goshime says. “We have 40- plus member associatons asking to take part in the qualifers, if this continues we will push forward to 16,” she added.

Plucky debutants against estabished power house invariably offers up a jolly narrative in any big competition.

And it was just as evident during the initial tranche aof action in Morocco with Burundi, Togo, Botswana and Burkina Faso making their entrances. Burundi had to face defending champions Nigeria and serial finalists South Africa in Group C.

Botswana, who were also in Group C, made it into the quarter finals as one of the two best third-placed teams from the three groups.

And because the 2022 competition served as a qualifying tournament for the 2023 World Cup, they were 90 minutes from reaching that tournament. Such achievement would have been spectacular.

Instead the hosts booked their ticket.

“I am extremely proud of my team,” said Pedros when reviewing the exploits of his side over three heady weeks in July.

What coach could ask for more? The gods won’t be disappointed either.