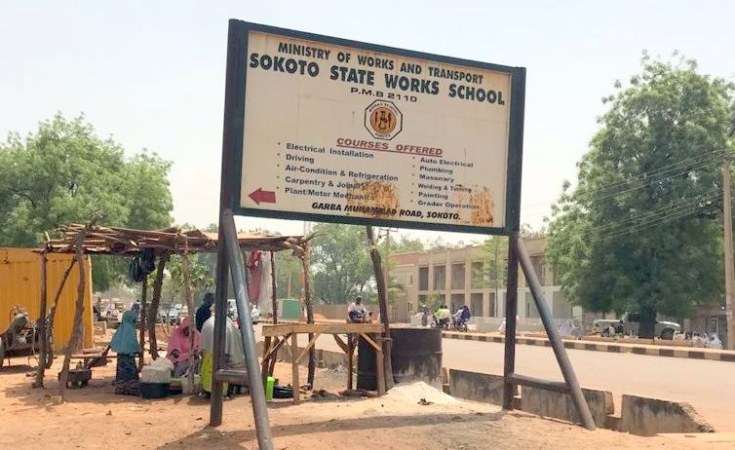 Officials give reasons for the parlous state of Sokoto’s only government-owned vocational training school.

For Mansur (not real name), a final year student of Usmanu Dan Fodiyo (UDUS), the decrepit sight of the Sokoto School of Works is not new. A private hostel in the school of works is where he has resided since his first year in the university.

The school of works’ hostel, just about fifteen minutes walk from UDUS, is usually deserted except for a few casual workers and guards.

As Masur disembarked from the slab holding the only tap water in the school, he wore an unsurprising look as he approached this reporter.

Asked why the school was so deserted that morning in early April, “You know the school is not functioning again,” came his response. “It is not improving compared to the past, I have not been seeing their students,” he added.

Like Mansur, another UDUS student, Abdullah (not real name), was intensely disturbed about the unfolding event. This was apparent by the anguished expression that arched across his face. He said the school has been in the same state he met it since he decided to live in the hostel three years ago. No development and changes has occurred, he said.

The main entrance of the campus gave the impression that no serious educational or vocational activities had been going on within the campus for years.

Once inside, one soon discovered that the driving department of the school is the only active department engaging students with practicals. Other structures could easily be mistaken for abandoned homes left behind by the nation’s former colonial masters.

Other departments include mechanical, electrical, painting, welding, plumbing and turning. According to the school handbook, the school once flourished with over 100 students. However, years of neglect have pushed enrolment to drop.

In April, when this reporter visited the office buildings, classrooms and departments of the school, the ambience there was quiet and drab except for intermittent chirps of crickets and birds. All doors were closed except that of the director and a few others. Several greetings and knocks at dusty office doors went unanswered.

The only major proof of the presence of classrooms in the school were dusty blackboards and obsolete notices hung at the entrance of each of the classrooms, with cobwebs covering the padlocks on their doors, and no single chair was seen inside them.

A day after, a practical class for students of the driving department was being held when this reporter visited. There, Jubril Muhammad, who was practising alongside a few other students, was met. About seven students were present during that particular class.

Mr Muhammad said since he joined the school in February, he never attended any theoretical class. His programme comprising of both the theoretical and practical aspect, was supposed to last for six months. But due to the failing status of the school, they have been left to focus on just the practical aspect.

“I never go to the class, I just registered here directly,” he said.

“What I think is that people are no longer interested in the school again. The government is negligent about its management and funding.

“Government should quickly invest in the school because what people nowadays want is something new and attractive. When they see something old. they won’t feel the need to be there,” he said.

Another student, who simply identified himself as Mica, also spoke about the situation.

“I never go to class. The government should do something for the school. This car is very old, they are supposed to change it,” he said, pointing at the car in use for learning, a bad conditioned, old fashioned red 1996 Toyota Carina E.

The trainer at the time was a staff in the school simply identified by the student as Mallam Mustapha.

The school had seven departments when it was established, When visited in April, only the driving department was functioning, with about 10 members of staff consisting of casual workers and a guard.

Its once-promising prospect is now fading as subsequent visits to the school showed.

What looked like a ray of hope was in 2018 when the school was first nominated for “fencing and rehabilitation” during the first tenure of Governor Aminu Tambuwal. Then, the government budgeted N80 million for the project.

In the breakdown, the government approved N10 million for the fencing while N70 million was approved for the rehabilitation of the school.

The project was re-nominated in 2019 in the approved 2019 Sokoto State budget with the same caption and same budgetary allocation pegged at N80 million.

However, in response to a Freedom of Information request, an official told this reporter that no money was released from the approved budget.

Due to underfunding, therefore, the facilities at the institution remain decrepit.

When contacted in May, Kabir Muhammad, the director-general of the Sokoto School of Works, declined to comment on the finances and the state of the institution.

“I am sorry. I cannot grant you that for now. I need to seek permission to speak on this from my bosses in the ministry of works,” he said.

Mr Muhammad, who had been the director-general of the school for the past eight years, declined subsequent requests for an interview.

“There are lots of things wrong in this country, like insecurity and the state of our economy. People are dying every day, there is poverty in the country and the cost of living is high. You people should channel your reporting there,” he told this reporter.

When asked about the state of facilities and locked offices, he said the government is planning to rehabilitate the school.

He noted that the government has set up a committee, and the committee has made some inquiries as regards the situation from him. He also said that many directors of different departments are now retired and the school is trying to replace them.

Mr Muhammad, unfortunately, passed on in September and his replacement has not been named. However, the situation in the Sokoto school of works remained the same when this reporter visited in early December.

The acting permanent secretary of the Sokoto State Ministry of Works and Transport, Ismail Lawali, in response to an FOI, said no funds were released for the execution of the project.

“We budgeted for reconstruction and rehabilitation of the Works school but funds have not been released. In our state here, We have stages in budget implementation, approval has to be gotten from the governor, and upon such approval, it would be deliberated upon by the executive council, so this project has not passed through those stages,” he said.

In his reaction, the works ministry’s mechanical director, Bello Sulayman, said the school had not been rehabilitated because of inadequate finances available to the state government.

“This thing is in process, but the government has priorities and limited funds, we have written a memo, we’ve done everything necessary about it, but we are still waiting for approval,” he said.

“If at the end of the day, the approval has not come, what do you do? The government is still undertaking a lot of projects like the construction of flyovers and roads within the state,” he noted.

Asked how the government determines its priority, Mr Sulayman said, “I don’t want us to go into that, we are mindful of the need to rehabilitate the works school and that’s why proposals are made and as far as we are concerned, we are doing what is necessary for us.”

“We’ve informed the government about the need for rehabilitation and it is part of the plan that one day the government will come and do something about it,” he said.