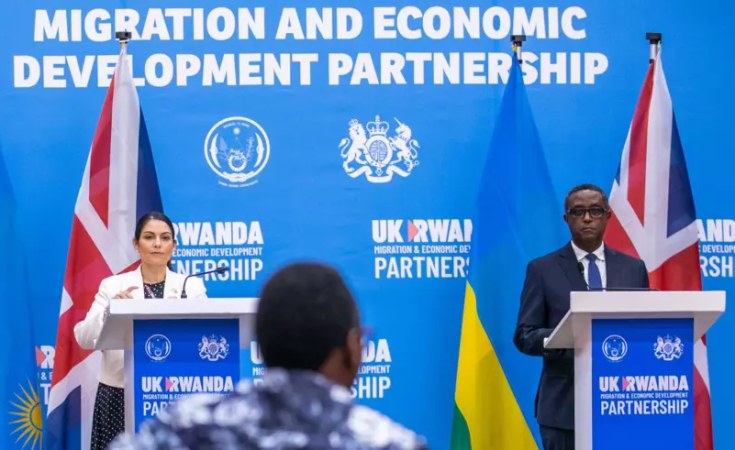 London — The British government is facing strong backlash from opposition parties and human rights groups after announcing plans earlier this month to send asylum-seekers to Rwanda for processing, in a bid to deter migrants from crossing the English Channel in small boats.

The British government says the prospect of being sent to Rwanda will deter migrants from embarking on the treacherous journey.

More than 4,500 migrants have crossed the English Channel from France to Britain in small boats this year, four times more than the total this time last year. There have been dozens of fatalities, including 27 migrants who drowned when their boat capsized off the northern French coast in November.

There is broad political agreement that the dangerous treks must stop, along with bitter debate about how that can be accomplished.

Britain’s latest plan is to fly migrants more than 6,000 kilometers to Rwanda, where they will be put in holding centers while their asylum claims are processed. Britain’s home secretary, Priti Patel, signed the policy alongside Vincent Biruta, Rwanda’s minister of foreign affairs, during a visit to Kigali earlier this month.

“The persistent circumventing of our laws and immigration rules and the reality of a system that is open to gain and to criminal exploitation has eroded public support for Britain’s asylum system and those who genuinely need access to it,” Patel told reporters. “Putting evil people, smugglers, out of business is a moral imperative. It requires us to use every tool at our disposal and also to find new solutions.”

“Working together, the United Kingdom and Rwanda will help make the immigration system fairer, ensure that people are safe and enjoy new opportunities to flourish. We have agreed that people who enter the U.K. illegally will be considered for relocation to Rwanda to have their asylum claims decided and those who are resettled will be given the support, including up to five years of training, with the help of integration, accommodation, [and] health care so that they can resettle and thrive,” the British home secretary said on April 14.

Britain has paid Rwanda an initial $156 million for a five-year trial plan. Britain will also pay Rwanda for each migrant the African nation accepts.

“This [plan] will not only help them, but it will benefit Rwanda and Rwandans and help to advance our own development,” Rwanda’s Minister of Foreign Affairs Vincent Biruta told reporters.

The policy has prompted a furious response in Britain and elsewhere. Archbishop of Canterbury Justin Welby — the most senior cleric in the Anglican Church — criticized the policy in his Easter sermon. “Subcontracting out our responsibilities, even to a country that seeks to do well, like Rwanda, is the opposite of the nature of God,” Welby said.

Migrant support groups say Britain should not be outsourcing refugee processing to Rwanda, a country where London itself has flagged human rights concerns.

“We think it’s inhumane, it’s going to be very expensive, and it won’t be effective,” James Wilson, deputy director of the group Detention Action, told VOA. “The U.K. is a signatory to the refugee convention. We have a legal and moral obligation to be assessing any asylum claims to the U.K. in the U.K.”

Wilson said the government should provide safe routes for refugees to reach Britain. “A humanitarian visa system, so that those who have reached France and are looking to claim asylum in the U.K. and having some grounds for doing that would be able to apply for a visa to come to the U.K. to have their asylum claim considered. If we put that kind of scheme in place, which we think is entirely practicable, it would end the need for Channel crossings,” he told VOA.

Patel says Rwanda is “a safe and secure country with the respect for the rule of law and clearly a range of institutions that evolved and developed over time.” She also said Rwanda already has resettled almost 130,000 refugees from multiple countries.

Britain says asylum-seekers should apply for refugee status in the first safe country they arrive in, including France. The United Nations disagrees. “There’s nothing in international law that says you have to ask in the first country you encounter,” said Larry Bottinick, a senior legal officer for the U.N. High Commissioner for Refugees.

“UNHCR understands the frustration of the U.K. government on that and is not in favor of Channel crossing, of course. We think there’s more effective ways and more humane ways to address this,” Bottinick told The Associated Press.

Until 2014, Australia sent thousands of migrants to offshore processing centers in Papua New Guinea and the Pacific island of Nauru. Many asylum-seekers are still being held in these facilities. The policy failed to deter migrants, says analyst Madeline Gleeson, a senior research fellow at the Kaldor Center for International Refugee Law at the University of New South Wales in Sydney.

“In the first year of offshore processing being in place, more people arrived in Australia by boat than at any other time in recorded history of asylum-seekers arriving that way,” she said.

Gleeson says Britain has indicated that only some migrants will be sent to Rwanda, and they are likely to be single men.

“If that is the case, what you might find is that the next boats coming across the Channel belonged to those groups which are not going to go to Rwanda — so you might see increased numbers of women and children coming on that boat,” she said. “And the concern there is if those boats sink or if they run into trouble, you’re likely to have a much higher human toll if there are more women and children on the boat.

“There will be a cap on how many people can go to Rwanda. And so, the U.K. risks running into the problem we found here in Australia, which is very quickly — within 12 weeks of this policy starting — we had already maxed out the full capacity offshore,” Gleeson told VOA.

There are further concerns the migrants sent to Rwanda will simply try again to reach Britain, thereby fueling the human trafficking gangs that operate from Africa to Europe and on toward the English Channel.