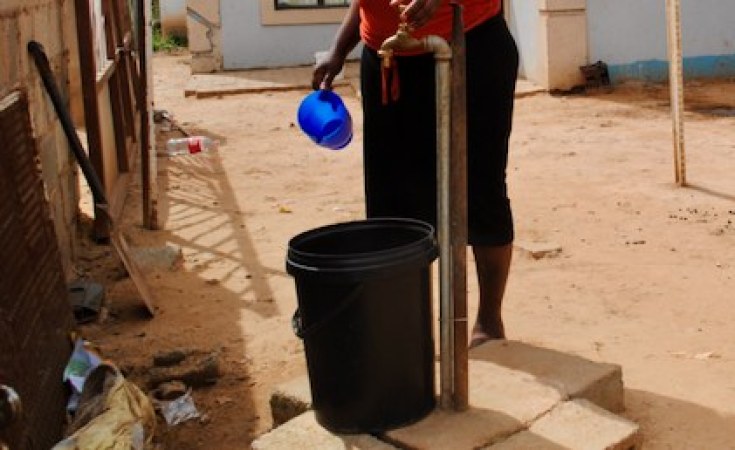 Taps have run dry in Endlovini informal settlement in Khayelitsha for at least three weeks. The settlement is home to about 10,000 people.

The City of Cape Town provides water trucks but the trucks do not supply everyone.

According to Ward Councillor Lonwabo Mqina, the area has experienced water shortages during the summer months for the past four years.

“I informed the City of Cape Town last Friday and they promised to look into the matter. I told them it was an emergency because people didn’t have water at all. They promised to deliver water with a truck which they did,” he said. But some households did not get any water that day, he said.

GroundUp watched as people rushed with their buckets and drums to collect water from the trucks.

Resident Zizipho Nokhwethu said the water issues were serious. “When the water truck came on Friday, I was lucky because my house is close to the road. Those who live far from the road didn’t get water. On Saturday most people waited for the truck but it never came,” she said.

Ward committee member Sisanda Pike said they want the City of Cape Town to find a permanent solution to their water problems. “Even today people are complaining of not having water. There’s no sign of the water truck,” she said.

The City’s Mayoral Committee Member for Water and Waste, Zahid Badroodien, blamed illegal connections to the City’s reticulation infrastructure as well as increased demand from new informal settlements in the area, for the area’s water problems.

Badroodien said the City’s infrastructure is strained. “These illegal connections result in water being used before it can reach standpipes and water tankers in the Endlovini areas.”

“The City will continue to assist as far as possible. Water is planned to be delivered twice per week as an interim solution until the new Bulk Water main along Baden Powell Drive is commissioned,” he said.

Fikile Mbalula is going after us for R2 million. We must be doing something right. Support news that matters. Please donate to GroundUp.