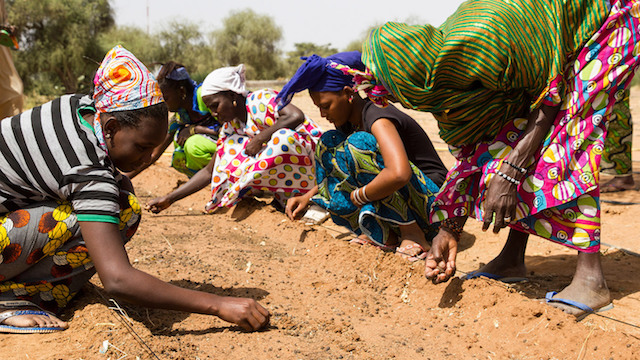 By 2030 the ambition is to restore 100 million hectares of currently degraded land and sequester 250 million tons of carbon. Credit: Greatgreenwall.org

MADRID, Feb 17 2022 (IPS) – Once completed in 2030, it could well be considered the world’s eighth wonder, this time natural. It is the African-led Great Green Wall or the largest living structure on the planet – an 8.000 kilometres natural hit stretching across the entire width of the continent.

It is a symbol of hope in the face of one of the biggest challenges of our time – desertification, the UN Convention to Combat Desertification (UNCCD) informs. And it aims at restoring Africa’s degraded landscapes and transforming millions of lives in one of the world’s poorest regions, the Sahel.

Launched in 2007 by the African Union, the Great Green Wall Initiative is being implemented in more than 20 countries across Africa.

The UN Convention adds that the initiative brings together African countries and international partners under the leadership of the African Union Commission and the Pan-African Agency of the Great Green Wall.

Its implementation coincides with the UN Decade on Ecosystem Restoration 2021-2030.

On this, the UNCCD also reports that, by 2030, the ambition of the initiative is to restore 100 million hectares of currently degraded land; sequester 250 million tons of carbon and create 10 million green jobs.

This will support communities living along the Wall to the following five ‘grows’:

— Grow fertile land, one of humanity’s most precious natural assets

— Grow food security for the millions that go hungry every day

Another challenge facing the African nations which will benefit from the Great Green Wall is the rapid advance of desert dunes on cultivated areas and entire villages and towns, which the Wall will help reduce.

From Senegal to Djibouti, from West to East

The Great Green Wall snakes the Sahel region from Senegal in the West to Djibouti in the East of Africa, explains UNCCD.

The total area of the Great Green Wall initiative extends to 156 million hectares, with the largest intervention zones located in Niger, Mali, Ethiopia and Eritrea. Since its launch, major progress has been made in restoring the fertility of Sahelian lands.

The race to restore 100 million hectares of Africa’s Great Green Wall now begins, the world Convention to Combat Desertification reported, as the ministers of Environment, Finance and Planning from Africa’s Great Green Wall countries and the partners active in the initiative met by the end of last October to discuss new arrangements to help countries in the Sahel Region in this giant effort.

Meeting for the first time since the Great Green Wall Accelerator was announced in January 2021, the partners reviewed proposals to overcome bottlenecks. Pledges have so far reached 19 billion US dollars.

According to Ibrahim Thiaw, Executive Secretary of the UNCCD: “In a world that looks at the Sahel region and sees only despair, the Great Green Wall offers hope. In a world struggling to work out what ‘build back better’ or climate resilience or sustainable development really looks like, the Great Green Wall makes tangible and practical sense.”

The restoration of 100 million hectares of land by 2030 in the Sahel would create an estimated 10 million jobs and lock away 250 million tonnes of Carbon dioxide from the atmosphere into the soil.

Africa’s Great Green Wall initiative to combat desertification in the Sahel region is not only crucial to the battle against climate change but also makes commercial sense for investors, a recent study led by the Food and Agriculture Organisation of the United Nations (FAO) and published in Nature Sustainability shows.

For every US dollar put into the massive effort to halt land degradation across the African continent from Senegal in the west to Djibouti in the east, investors can expect an average return of 1.2 US dollars, with outcomes ranging between 1.1 US dollars and 4.4 US dollars, the study finds.

“The greening and land restoration along this belt stretching 8,000 km across the continent is already underway. Communities are planting resilient and hardy tree species such as the Acacia senegal, providing gum arabic, widely used as an emulsifier in food and drinks and the Gao tree or Faidherbia albida, which helps to fertilise soil for the cultivation of such staples as millet, and for animal fodder.”

The UNCCD has launched a public awareness campaign on the Great Green Wall, called “Growing a World Wonder.”

The campaign aims at boosting global awareness of the initiative in public spheres, policy debates, as well as media and cultural sectors with a clear view towards inspiring long-term public and private investment in the initiative.

As importantly, the Great Green Wall places local populations and national institutions at the center, making traditional knowledge and capacities the entry points, taking a holistic approach and putting in place effective governance and accountability systems.

History tells that in the so-called ‘Black Continent’ — home to nearly 1,4 billion people–, the region covered by the Great Green Wall was, once upon a time, a huge green valley.