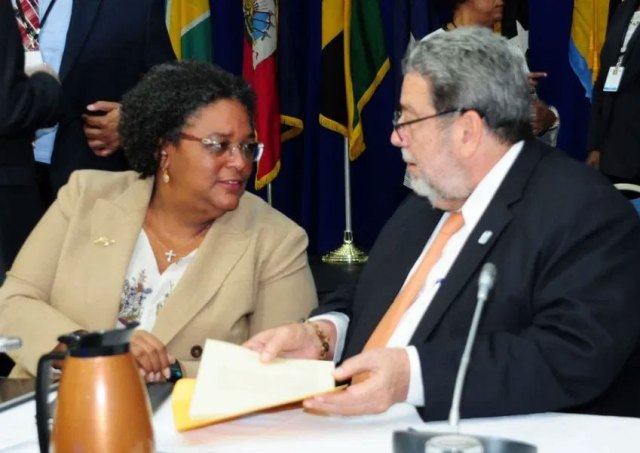 The University of the West Indies (The UWI) proudly celebrates Prime Minister of Barbados, Mia Mottley, and Prime Minister of St Vincent and the Grenadines, Dr Ralph Gonsalves who both recently received international recognition for their leadership and influence.

Prime Minister Mottley was lauded by the global media brand, Time on its TIME100: The Most Influential People of 2022 list.

The publication annually recognises the world’s pioneers, leaders, titans, innovators, and icons. To celebrate this year’s laureates, Time published five worldwide covers in May, each highlighting a member of the TIME100, and Prime Minister Mottley was selected for the cover representing influential leaders.

In the rationale for the Prime Minister’s inclusion on the list, Ngozi Okonjo-Iwela, Director-General of the World Trade Organisation reflected on her staunch advocacy for the Caribbean at COP 26 held in Glasgow, Scotland in 2021, and described her as “an embodiment of our conscience, reminding us all to treat our planet and therefore one another with love, dignity, and care…”

Offering congratulations on behalf of the regional university, Vice-Chancellor Sir Hilary Beckles noted that “The region salutes Prime Minister Mottley’s advocacy on climate change and the clarion call she has sounded, urging world leaders to do more to limit the potential catastrophic impacts for the Caribbean. Her service as Chair of the World Bank and on the International Monetary Fund’s Development Committee has also left an indelible impact and we continue to be in awe of her leadership and charisma,” he said.

On May 26, Prime Minister Ralph Gonsalves was conferred the Order of José Martí by President of the Republic of Cuba, Miguel Díaz-Canel.

The date marked the 30th anniversary of diplomatic relations between St Vincent and the Grenadines and Cuba.

The award is named after José Martí, a former nationalist, poet, philosopher, essayist, journalist, translator, professor, and publisher, who is considered a Cuban national hero because of his role in the liberation of his country from Spain.

The Order of José Martí is the country’s highest national award. Prime Minister Gonsalves has been a firm activist for the inclusion of Cuba in hemispheric forums.

Sir Hilary stated, “It is an honour that is well deserved to our distinguished alumnus, Prime Minister Gonsalves. The UWI applauds his unyielding efforts to promote Caribbean unity and persistence in nurturing strong relations within Latin America and the Caribbean, as well as his commitment to being a loyal ally to our Cuban neighbours.”