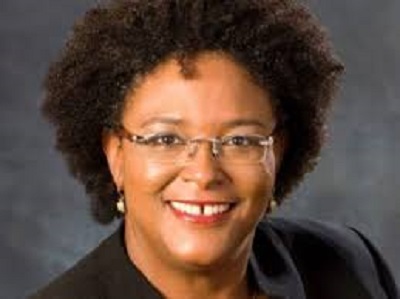 BRIDGETOWN, Barbados, Dec 17, CMC – Prime Minister Mia Mottley Friday warned of the “unwarranted and potentially dangerous situation” arising out the decision by nurses to take industrial action which she said had been inspired by opposition legislators and a trade unionist.

Nurses represented by the Unity Workers’ Union (UWU) have been staying off the job for just over a week, protesting unsatisfactory work conditions and other grievances, as well as a proposal by the government to require them to be fully vaccinated against the coronavirus (COVID-19) virus or undergo periodic testing under a Safe Zones policy.

In a lengthy statement, Prime Minister Mottley said that she had read the comments attributed to Opposition Leader Bishop Joseph Atherley, as well as Senator Caswell Franklyn, who is also the UWU president, and the general secretary of the Democratic Labour Party (DLP), Derek Alleyne, and as a result “I must say that I am even more disturbed by this totally unwarranted and potentially dangerous situation that has been created by the Frankly-inspired strike”

She questioned to “what lengths will this group go to make a political point” adding “are you really boasting that you have paralyzed the National Vaccination Programme in the middle of a dangerous and deadly Pandemic with new variants lurking around?

“Are you seriously personally satisfied that your actions are preventing your own citizens from getting access to potential life-saving medications when the clear evidence emerging is that this is what protects us against these new variants that are lurking? Is this really what we have come to in Barbados? This is unbelievable,” Mottley said.

Earlier this week, Prime Minister Mottley, flanked by representatives of other trade unions and the private sector, condemned the strike action, indicating also that the pay of the striking healthcare workers would be docked for the duration of their time off the job.

“It is my considered judgment that this matter is not industrial; this matter is political and we are in the silly season,” Mottley told reporters on Wednesday.

But in response, the Opposition Leader stopped short of describing the allegation as hypocritical, and that it was also “awkward” that Mottley would accuse Franklyn of “playing politics”, while she surrounded herself with other union leaders and spoke of some of the accomplishments of her administration for public sector workers.

“I certainly thought it was disappointing, it was awkward, it is an insult to the intelligence of the Barbadian public that you can accuse somebody of playing politics while at the same time yourself playing politics,” he said.

For his part, Franklyn, who also dismissed Mottley’s assertion that he was playing politics, questioned why other labour unions were involved in the discussions.

“Now why would the Unity Workers’ Union be on strike and the Prime Minister hold meetings with the people who are not on strike to sit down and attack the people who are on strike? Think about that. That is one of the protocols that you should observe,” Franklyn told the online publication, Barbados TODAY.

The DLP’s spokesman on health, Andre Worrell said that Prime Minister Mottley’s intervention on the matter was “unfortunate” and has “thrown fuel on the fire when the matter needs to be quickly resolved.”

The DLP said it is urging the government to work to quickly address the concerns of the nurses in good faith and show the nursing profession the level of respect it rightly deserves.

“The nurses strike over long-standing issues which were made even more perplexing as a result of the tremendous burden which the healthcare sector has been under as a result of the COVID surge.  The safe zones and vaccine mandate may be the catalyst for the strike, however, more pressing issues are on the card.

“Instead of addressing these issues the Prime Minister focused on undermining the character of the striking workers and the lone union which saw it fit to take a stand for the rights of workers in Barbados,” Worrell said in the statement.

He said the nurses made it clear that the vaccines alone will not make their work environment safe and that other long-standing issues needed to be addressed.

“Among these are the payment of Hazard pay and allocation of adequate PPE to nurses including those at the Polyclinics and not just the ones at the isolation centres.  Other critical issues include the overall safety of the working environment as well as the cleanliness of the working environment with increasing incidents of bed bugs in the facilities.  The nurses should be heard and negotiated with in a fair and cordial manner.”

But in her statement, Mottley said that the action by the nurses has left ordinary Barbados at risk of being affected by the virus.

“This is not a test trial in a lab somewhere where you are working on mice. These are real people who if left without the option of getting these vaccines due to the recklessness stance, potentially face a literal death sentence if God forbid they catch COVID.

“This is not Mia Mottley’s belief; these are cold hard proven medical facts backed by the empirical evidence right here in Barbados over the past months. Unvaccinated people we have seen for ourselves, face the highest risks of serious illness or death when they contract COVID-19.

“And I ask why on God’s earth would anybody, and especially these goodly gentlemen see no problem in promoting or supporting actions that imperil lives?

Mottley insists that the statements made by the opposition politicians reinforce all that she have said in the past and “my view is that it is these political actions that are putting at risk our people. It does not conform or resemble any aspect of our industrial relations practice.

“Are they really prepared to undermine the integrity, also, of an industrial relations system that is based on clearly established protocols that are globally recognized and respected? Our actions today will determine what is permissible conduct in the management of our industrial relations going forward. And that is why all of the established unions in this country stood united as a Social Partnership because they know what is at stake,” Mottley added.

She questioned why  Bajans should be “be asked to go into Christmas week this week, worried that if they get sick they might be in trouble.

“Is there no room in this country for right and for wrong and to understand the difference between the two? My advice – no my prayer – is for Senator Franklyn to listen to that part of the Bible that says, “Go to the ant thy sluggard way – consider her ways and be wise,” Mottley added.