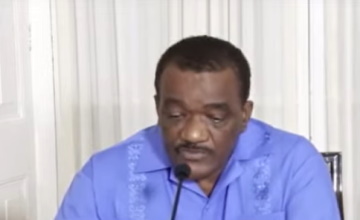 BRIDGETOWN, Barbados, Dec 21, CMC –The Barbados government has denied allegations that it had engaged in a divide and rule strategy after the island’s Nurses Association (BNA) appealed to health care workers to return to their jobs ending their strike that has significantly impacted the delivery of coronavirus (COVID-19) vaccines to the public.

Head of the Unity Workers Union (UWU), Caswell Franklyn has accused Health Minister Jeffrey Bostic of adopting the strategy after he announced improvements to the working conditions of hundreds of nurses, following three recent meetings with the Barbados Nurses Association (BNA).

“The Minister sat down, took notes from our meeting, read back the points that we had made to him and then went back and gave them to the Barbados Nurses Association. I thought he was an officer and a gentleman,” Franklyn said.

“Nobody has spoken to me. I don’t know of anything. He had a press conference… and he talked with them. When we get official word, we will deal with them,” said Franklyn, who is also an opposition legislator.

Franklyn said that some of the issues the nurses want addressed include better pay, health insurance, remuneration for degrees, advancement, continuous training and better working conditions.

But during a virtual news conference on Monday evening, Bostic announced that reforms addressing appointments, uniform allowances, specialised training, late and sporadic pay, and environmental conditions had been discussed with the BNA.

“I am happy to report that the meeting was very cordial and this really paves the way forward for trying to improve the working conditions of our nurses,” Bostic told reporters.

BNA president, Valarie Francis-Miller, said that the new policies were consistent with recommendations to improve the quality of nursing care in Barbados and called on striking nurses to return to their posts.

“I believe these are things they have been asking for as well and today we were able to achieve these things. So, I would like to ask them to return and let us come and negotiate with these entities so that we can push nursing forward and not compromise patient care,” she said, while praising Bostic for addressing the concerns with seriousness.

For his part, Bostic, has denied accusations of divide-and-rule tactics saying that the meetings were convened with all of the country’s major unions, including the UWU, on a range of matters, including the controversial Safe Zones policies.

However, he said, UWU claims that nurses’ finances had been frozen were outside the scope of his responsibilities.

“So, there’s no divide and rule here. Far from divide and rule, we are seeking to bring all parties to the table so that we can arrive at some solutions that will be beneficial for the persons in this country who seek nursing care and also for all of the nurses, because there is no division with the nurses.

“The nurses provide a very, very important service and I am sure that they will continue to do so and we are willing at all times to meet with anyone who, following the processes and protocols, requests a meeting to discuss issues and that is exactly what happened today,” Bostic added.

The new resolutions for nurses include the appointment of about six remaining temporary nurses due for appointment, and the provision of transportation for nurses at rural district hospitals and the Geriatric Hospital who are often on the road at “unsociable hours”.

A comprehensive review on allowances also arose, as the nurses discussed the absence of an updated uniform allowance, and the Ministry has agreed to provide scrubs and ceremonial uniforms. The parties also agreed to the provision of laundry services and committed to a quarterly review of these amenities.

Nurses will also receive specialised training in areas like paediatrics, gerontology and a nurse practitioners’ course through the University of the West Indies and Chamberlain University