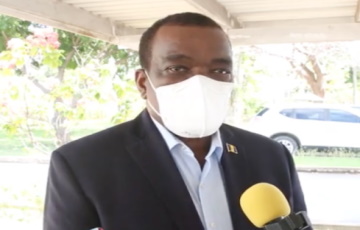 BRIDGETOWN, Barbados, Dec 15, CMC – The Barbados government will meet with the union representing striking nurses whose industrial action has led to the coronavirus (COVID-19) national immunization programme being impacted.

Health Minister, Jeffrey Bostic said that the talks are likely to resume later this week as the authorities seek to settle a range of longstanding grievances.

“Daily, nurses have been unavailable to administer the vaccines at some sites, which continue to be reduced because of this issue. However, the Ministry of Health and Wellness wishes to assure members of the public that despite the current challenges being faced, they will be updated, in a timely manner, as to which sites will operate on a daily basis,” the Ministry of Health and Wellness said in a statement.

Bostic told reporters there are “signs of further action in relation to others being involved”, but he said the matter will be dealt with in the coming days and assured that the Ministry is on standby to put measures in place to maintain the provision of healthcare services.

“We are on a particular plan at the moment in relation to how we reconfigure or reorganize the team, and if push comes to shove and we have to dig deeper, we also have a contingency plan that will speak to that, where we will try to make sure that we can provide services at select polyclinics if it comes to that.”

Leader of the Unity Workers’ Union (UWU), Caswell Franklyn, who is also an Opposition legislator, said the action taken by his members was triggered by a memo from the Geriatric Hospital which informed nurses that weekly testing for unvaccinated employees would begin in accordance with the Safe Zone Directive No. 2, 2021.

But Bostic explained last Monday that the memo had been sent prematurely and on Tuesday told reporters that concerns about the safe zones were not the main issues arising from his talks with the nurses last Thursday.

“Things like increases in pay, restructuring of the whole nursing bands in relation to payments and so on, things like technical training, which are issues we have been addressing, and I will speak to that at the right time. Things like appointments, medical insurance for nurses and the conditions for nurses in terms of the facilities that we have.

“This is something that has also been going on for years. We obviously saw that when we came into office and we started to systematically address some of those issues in the hospitals, the polyclinics and wherever we could.

“And, in fact, even the two outpatient clinics at St Joseph and St Andrew which were condemned for closure have been renovated. In fact, I would say we rebuilt those, because they look far different from what they used to look like, and we are hoping to do a similar thing to the clinic at St Thomas as well,” Bostic said.

“So, we have been doing work at the hospitals but, regrettably, when you do not have the resources to do everything you can’t do everything all at once,” Bostic said, maintaining that the ministry is continuing efforts to improve conditions in the health sector and will, at the appropriate time, outline what has been done, particularly in relation to nursing.