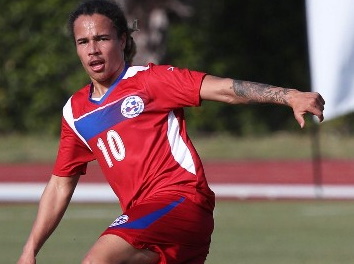 But police renewed their appeal for witnesses who were present at a party held on Saturday night at Fun Zone in St David’s, where 23-year-old Bascome was stabbed multiple times, to come forward.

Detective Chief Inspector Peter Stableford said that the appeal for the public’s help into the “tragic” incident had been “somewhat successful”, and he thanked those who had come forward.

“That information has allowed the investigation to progress, resulting in this arrest. We are aware there are individuals who accompanied Osagi to that party at Fun Zone who, for whatever reason, are refusing to speak with us.

“Their unwillingness to co-operate with police is worrying. We urge those individuals to reconsider their position and help provide justice and closure to Osagi’s family,” Stableford said

Bascome, who played domestically for St George’s Colts, earlier had two spells in England, where he turned out Bristol City’s Under-23 side and later for National League North club Darlington, whose women’s team fans remembered him on Sunday with a minute of silence.

Darlington fans said they also plan to remember Bascome on Boxing Day with a minute of applause during the men’s team’s game against Spennymoor Town, whose goalkeeper is Bermudian Dale Eve.

The club said in a social media post: “Everyone from the club’s thoughts are with Osagi’s family and friends.”

Bascome’s heartbroken parents, Herbie — Bermuda’s national cricket coach — and Carla, said in a statement “he was love personified, to know Osagi was to love him. He was a beautiful son, brother, uncle, grandson, nephew, boyfriend and friend.

“He put his heart into everything he loved. He loved his family, friends and he loved football. From a toddler, his daddy always told him that he is the king, and what a blessing he has been to our entire family. We miss Osagi so much and he will live on in us and through us< the family said, adding “Osagi’s death will not be in vain.

“This violent act is difficult to process because he had so much love in his heart. Osagi would want us to love harder and live life every day and that is giving us strength to carry on.”