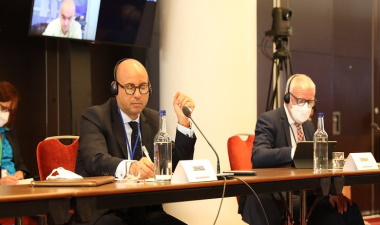 Stiell, who had served as the Caribbean island’s minister for climate resilience and the environment until this year, will replace Patricia Espinosa, who finished her second, three-year term as executive secretary of the UNFCCC in July

Simon Stiell at a pre-Cop meeting in the UK last year (Photo: Cabinet Office/Flickr)
Stiell is regarded as a veteran advocate for climate ambition from a vulnerable Caribbean island state. On the global stage, his calls for rapid reductions of emissions have put him at odds with big emerging economies like China, while his lobbying for climate finance has met resistance from rich countries like the United States and the European Union.

The UNFCCC declined to comment at this time, but many media outlets including the Reuters and Climate Home News, said Stiell, who was appointed to Grenada’s Senate and went on to lead ministries for agriculture and education before becoming Grenada’s minister for climate resilience in March 2018, is a shoe in for the post.

UN chief Antonio Guterres was responsible for the selection process and his decision was signed off by the UNFCCC bureau at a specially convened meeting on Thursday, the international media reported..

He studied engineering and business at London Metropolitan and Westminster universities in the UK, staying in the country to work for technology companies in the 90s before returning to Grenada. Back home he founded a property development company, became chair of the tourism board and vice-president of the chamber of industry.

Stiell has been a visible figure at U.N. climate negotiations, often calling for the world’s largest polluters to set more ambitious climate goals and to deliver finance promised to vulnerable countries, including small island nations. That funding is key to preparing for future climate impacts including extreme temperatures, rising sea levels, more frequent storms and drought.

Diplomatic sources are quoted as saying that Stiell would take the helm of the UNFCCC a few months before Egypt hosts the next U.N. climate conference, COP27, which comes after a year of global economic uncertainty and geopolitical issues have led countries to backslide on their climate pledges.

The job is based at the UNFCCC headquarters in Bonn, Germany and Stiell will lead nearly 400 staff who come from over 100 countries.