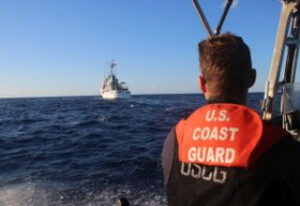 SAN JUAN, Puerto Rico, May 15, CMC– The United States Coast Guard says the crew of the Coast Guard Cutter Joseph Napier and Caribbean Corridor Strike Force agents have offloaded 626 pounds  of cocaine seized in the Caribbean Sea, with an estimated wholesale value of about US$5.6 million, in San Juan, Puerto Rico.

The US Coast Guard said the offload of the contraband resulted from a go-fast vessel interdiction on April 28,  in the Mona Passage near the Dominican Republic.

The interdiction is the result of multi-agency efforts involving the Caribbean Border Interagency Group and the Caribbean Corridor Strike Force.

The coast guard said that on the morning of April 28, the crew of a Coast Guard HC-27J Spartan aircraft detected a suspect vessel north of Mona Island, Puerto Rico.

“Coast Guard watchstanders in Sector San Juan diverted the cutter Joseph Napier that arrived on scene with the suspect vessel,” the US Coast Guard said. “Upon detecting the presence of the Coast Guard cutter, the occupants of the suspect vessel were observed jettisoning multiple bales of suspected contraband into the water and attempting to flee the area toward Dominican Republic territorial waters.

The US Coast Guard said the crew of the cutter Joseph Napier recovered 11 bales of the jettisoned suspected contraband, which tested positive for cocaine.

“Safeguarding the nation’s southernmost maritime border is among our top priorities,” said Captain Gregory H. Magee, Coast Guard Sector San Juan commander. “You can expect to see many more of these interdictions from the Coast Guard, federal and local law enforcement, and from our Dominican Republic Navy partners as we work together to stop drug smuggling go-fast vessels at sea and prevent them from making landfall in Puerto Rico.”

The US Coast Guard said special agents supporting the Caribbean Corridor Strike Force are leading the investigation into this case.