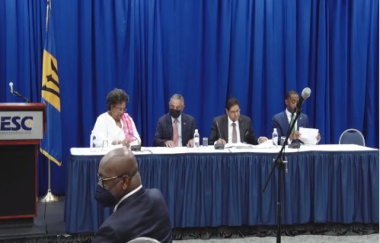 BRIDGETOWN, Barbados, Apr 20, CMC –Caribbean Community (CARICOM) leaders have ended a one-day round table discussion with United States lawmakers on the issue of de-risking and corresponding banking with an agreement that the matter should be an issue brought before US Congressional hearings.

“The most important decision that we made today is that the US Congressional delegation has agreed that this issue is of such major import that it really now merits congressional hearings to allow us to bring not only those who are here in Barbados today but to expose this issue to a wider audience,” Prime Minister Mia Mottley told a news conference.

She said this will also allow other stakeholders, including such as “banks who may well be benefiting from our business but who are not willing to share in the burden that may be necessary in meeting additional regulatory issues as it relates to giving us the opportunity to be beneficiaries of correspondence banking relationships”.

“The truth is that the refrain that is heard the most is that we are too small and not profitable enough for them to undertake the advanced due diligence that may be required of them in different markets,” Mottley told reporters, adding she hoped those hearings would take place later this year..

Several Caribbean leaders, as well as senior regional technocrats and representatives from the banking community participated in the roundtable discussion on De-Risking and Correspondent Banking that was chaired by United States Congress woman Maxine Water, the Chairwoman of the US House Committee on Financial Services, and Prime Minister Mottley.

Waters had told the conference that she hoped that a framework would be advanced here that could “become a model for other regions around the world facing similar obstacles to financial access.

“I welcome a robust discussion on the cause of de-risking as well as the negative effects to the financial access to the people and the region. These are the reasons that we cannot choose talk over action,” she told the ceremony.

Prime Minister Mottley told reporters that the meeting also agreed to an annual Caribbean/United States banking forum, a feasibility study for the establishment of a consortium bank in the United States to be used as a regional public good, as well as a proposal to establish an examiner training academy in the North American country to train state, local, federal and foreign examiners to ensure baseline standards were uniformed..

Mottley said that the complex regulatory requirements for simple tasks such as opening a bank account had led to a large number of people being unbanked and that dealing with these kinds of matters was imperative for the region’s survival.

Bermuda’s Premier David Burt lamented the fact that goalposts for countries in the region were continually being moved.

He said banking institutions were placing a “red light around the Caribbean” and determining that the region was too high risk to do business.

Burt said it was “strange” that a lot of that pressure was coming from the United States.

CARICOM chairman and Belize Prime Minister John Briceno, told reporters he was happy that the event had taken place in Barbados since “ I believe it is the first time we could have brought a high level US delegation to come to us in the Caribbean and to listen to our concerns and to listen to our frustrations.
“As all of us have been pointing out over and over we have been doing everything you asked of us,” he said, echoing the sentiments of Premier Burt about the shifting goal post.

“As we try to keep up with you, you change the goal post, we pass legislation, we amend legislation, we do regulations and as we do it you continue to change and we could never catch up with you,” Briceno said, adding “and it is frustrating for us as a region.

‘For the Americans that is not a big deal. If you are in the United States you can go an open a bank account in 20 minutes and walk out with a credit card. In the Caribbean it will take you weeks and sometimes months to open a bank account and this is ridiculous.”

Briceno said that the situation is due to the regulations being imposed on the Caribbean, adding that he also believes there should be “a moral responsibility by these large American banks that have severed relationships with small banks in the region (with whom) we had relationships for decades and just because we are not big enough and you will not make enough money from us they decide they will cut us off”.

He said these decisions were being made without any thinking about the consequences for people living in the region, who depend on remittances “and we need to do commerce to buy their goods.

“It is something of almost life and death for us,” the CARICOM chairman added.