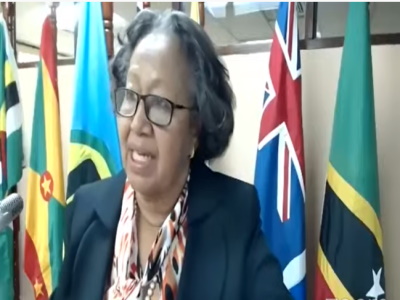 GEORGETOWN, Guyana, Dec 20, CMC – Caribbean Community (CARICOM) Secretary General, Dr. Carla Barnett Monday said that the Christmas season is once again tempered by the continuing onslaught of the coronavirus (COVID-19) pandemic that has killed an infected thousands of people in the 15-member regional integration grouping.

She said that throughout the year, CARICOM’s immediate concern has been how best to secure lives and livelihoods in the member states “as the virus’ lingering presence slows the recovery of the economic and social well-being of the people of our Community.

“The primary focus has been on acquiring sufficient vaccines to save lives and allow for the revival of economic activity,” she said, noting that with “a significant supply of vaccines has been made available mainly through the assistance of friendly governments including India, the United Kingdom, the United States, and Canada.

In addition, CARICOM has also benefited from its provisions under the COVAX Facility and the highly appreciated accommodation of the African Union through the African Medical Supplies Platform.

Barnett said that regional leaders, along with the Trinidad-based Caribbean Public Health Agency (CARPHA) and the CARICOM Secretariat are working tirelessly to maintain an adequate supply of doses.

But she said the grouping has also been looking at life beyond COVID-19 and that the CARICOM Commission on the Economy, comprising a group of eminent regional and international experts, provided advice on approaches to building resilience and on the return of CARICOM economies to a path of sustainable growth and development, including a 12-Point Action Plan in its Report entitled “Caribbean 9:58”. .

“Priority was also accorded to agriculture and tourism, given the adverse impact of the pandemic on those sectors. A Special Ministerial Task Force on Food Production and Food Security is working closely with the private sector on an Action Plan arising from a strategy put forward by the President of Guyana as Lead Head of Government with responsibility for Agriculture,” she said, adding that an Interim Tourism Working Group (ITWG) has prepared a Draft Joint Tourism Policy for CARICOM titled “COVID-19 Emergency Plan for the period October 2021 to December 2022”.

Barnett, who replaced the Dominican Irwin LaRocque in August, said progress was also made towards the Single ICT Space, with the initial engagement of the two principal telecommunications providers in the Region on the issue of the elimination of roaming charges in the region.

She said a negotiating team has been set up to continue the discussions.

On the relations with other countries, Barnett said that CARICOM foreign ministers “have been very active” in pursuing the region’s interest and have engaged with their counterparts in Canada, the United Kingdom and the United States.

“Our Community was also deeply involved in COP26 in Glasgow, Scotland. The outcome fell short of our expectations and much work needs to be done as we continue to advocate for action to reduce global emissions, so as to ensure that global temperature rise does not exceed 1.5 degrees above pre-industrial levels.”

On the issue of Haiti, the CARICOM Secretary General said that there is also need to work with the French-speaking member state, grappling with political, economic and social uncertainties.

“This has been made more challenging after the tragic assassination of His Excellency President Jovenel Moise.  The Community has been engaged with Haiti at the highest level and has offered to assist in crafting a Haitian-led solution.”

She said during the year, member states experienced time and again the benefit of working together to assist each other in responding to natural disasters, such as the volcanic eruption in St. Vincent and the Grenadines with the resultant heavy ashfall in Barbados, and the earthquake in Haiti.

“We also worked together to procure and share vaccines, to present a common front at climate change negotiations and to advocate strongly for our interests in discussions with foreign governments.

“As we enjoy the festivities of the season, let us not forget those who lost their lives to the pandemic and those still in its throes, and let us hold up and honour those frontline workers who continue to serve at great sacrifice,” Barnett added.