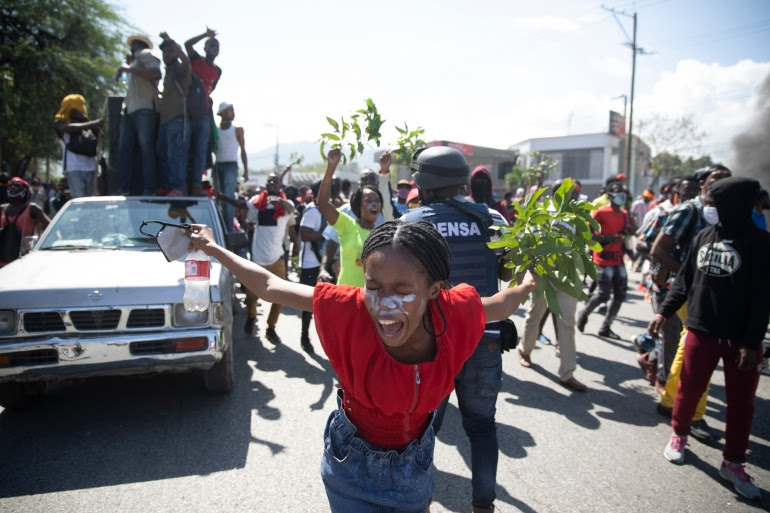 Police in Haiti fired tear gas on factory workers for a second day in a row, who are on strike demanding pay increases at an industrial park in the capital Port-au-Prince.

The workers employed at factories that produce textiles and other goods said they make 500 gourdes ($5) a day for nine hours of work and are seeking a minimum of 1,500 gourdes ($15) a day. Their demands come as Haiti has seen a sharp rise in inflation.

“Poor people can’t do anything with this miserable salary,” said Similien Luckgelson, one of the workers who joined the protest on Thursday near the international airport.

Strikers used burning tires to block a main road, and police tried to disperse the crowd with tear gas. But demonstrators persisted, ultimately gathering in front of an industrial park that employs them and was shuttered on Thursday.

The development comes amid worsening political and economic instability in Haiti, triggered by the assassination of President Jovenel Moise in July last year. Amid intense political deadlock, interim Prime Minister Ariel Henry’s term officially ended on February 7, creating a legitimacy crisis in the country and compounding its economic troubles.

Henry has said he will remain in office until elections can be held.

On Monday, Henry called for renewed efforts to organise elections as his adversaries push for the creation of a transition government to tackle the escalating gang violence in the country.

Henry said elections were the only solution to the political impasse and rejected the idea that he hand over power to a two-year interim government – a plan proposed by a group known as the Montana Accord.

Haitian Prime Minister Ariel Henry has not provided a timeframe for holding general elections, which would first require the government to name an elections council. [File: Ralph Tedy Erol/Reuters]

The Montana Accord, which includes economists, journalists, and former politicians, derives its name from a hotel of the same name where the group met to discuss a political platform.

Henry has not provided a timeframe for holding general elections, which would first require the government to name an elections council.

Meanwhile Telemark Pierre, a factory worker, said salaries have not been adjusted in three years. He said that workers spend 200 gourdes ($2) a day on transportation alone and said their salary does not cover basic needs.

He said workers will protest again next week if they do not receive an increase in wages.