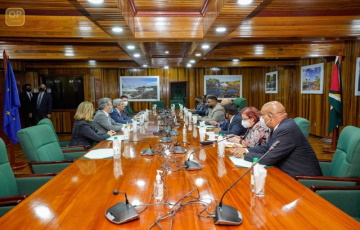 GEORGETOWN, Guyana, Dec 15, CMC – Guyana says it new found status as an oil producing country does not  preclude it from receiving concessional financing or support from international development partners.

“Yes, we are projected to grow tremendously and be a leading economy globally, but there is a transition time which brings with it, a transition gap,” President Dr. irfaan Ali said as Guyana received  €7.56 million (One Euro=US$1.29 )  in budgetary support from the European Union (EU).

Ali said that Guyana is making a case that in that transition gap, it still qualifies for concessional financing.

“We still qualify for support from international agencies, because the strong flow of revenue from the oil and gas sector will not occur immediately.”

A government statement said that Guyana currently has an estimated US$534 million in the Natural Resource Fund (NRF), but this is not significant compared to the revenue flows the government expects to receive when ExxonMobil ramps up production in the Stabroek block by 2027.

While only one floating production, storage and offloading (FPSO) vessel is producing offshore, it is expected that six will be operating simultaneously by then.

Additionally, the government is preparing to take a new Sovereign Wealth Fund Legislation to Parliament, to govern the system under which Guyana’s oil revenues will be managed.

Ali said Guyana will continue to accept support for development projects, geared at lifting up its most vulnerable communities and that its relationship with the EU is not coming to an end.

“That is absolutely not the case. For a matter of fact, that is why we have such a high-level visit today, because the intention of this visit is to define the strategic way forward, and the emerging challenges and opportunities and for us to come up with a common framework and a plan, as to how together, the EU and Guyana will navigate the future…”

The EU Ambassador to Guyana, Ernesto Araújo and the EU’s Deputy Management Director for the Americas, Javier Pérez. attended the ceremony

Araujo said that, “even though for other countries, we will not foresee bilateral programmes in the next several years, this will not be the case for Guyana. Guyana will continue to benefit from a national programme.

“We trust this country. We trust this government. We clearly believe that this is a well-defined strategy to move forward, to work on issues like infrastructural development, health, education, inclusivity, the green deal, and we want to be partners in that process.”

The two EU officials described the unfolding of the new relation as a political partnership, which will see Guyana and the EU cooperating, not just economically, but on foreign policy imperatives, which President Ali believes could yield tremendous strength.