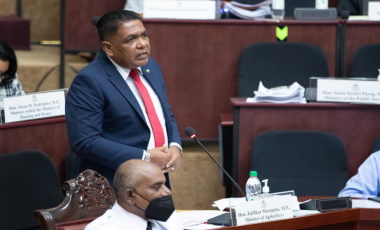 GEORGETOWN, Guyana, Sept 19, CMC –Government Monday said it has not received any response to its latest correspondence sent to Suriname regarding the delayed issuance of promised fishing licenses to local fishermen as well as other concerns facing Guyanese nationals along the Corentyne River that creates the border between the two Caribbean Community (CARICOM) countries.

Guyana says it had been promised 150 fishing licenses that will allow local fishermen to ply their trade in Suriname waters and will counteract the current renting of the licenses from Suriname.

“We are waiting on them [Surinamese] to issue the licenses. We have submitted all the information that they asked for to give the people who are renting the licenses,” the Agriculture Minister said.

Earlier this month, President Dr. Irfaan Ali told reporters that officials from the two CARICOM countries are scheduled to meet later this month after Georgetown had condemned “in its strongest possible terms” what it said was the most recent harassment being meted out to Guyanese fisherfolk by the Surinamese government.

Ali said then that the major sticking point has to do with the illegal use of existing licences that have been granted to Surinamese fisherfolk.

“One of the issues is the rental of licences. Licences that are granted to Suriname fishermen are being rented to the Guyanese. That is the core of the issue,” he told reporters , adding that the high-level meeting would “not only look at the current issues” of Guyanese fisherfolk being detained in Suriname but address licensing “moving forward in the long term”.

Ali said that he has personally been lobbying “key members” of Suriname’s private sector about the need for fair and equal treatment.

Last Friday, Vice President Bharrat Jagdeo accused Suriname of breaching a written agreement to grant 150 coastal fishing licences to Guyanese fisherfolk and warned that Guyana would take action against Surinamese companies if the issue was not resolved.

“We’ve worked with them, they have given commitments, they gave a commitment to the Minister of Agriculture in writing that we would get a hundred and fifty licences allocated to us; they reneged on that,” he said, warning that Guyana was prepared to take the matter to CARICOM.

“Our patience is being tested and we are going to write CARICOM on this matter and listen: These are different days,” Jagdeo told fisherfolk in East Berbice-Corentyne, adding that he would be “escalating” the issue because Suriname has been reneging on its negotiations and “behind the scene commitments.

“You can’t trust a single word that they say even when they give you in writing so it’s time we have a different approach on this matter,” he added.

Earlier this month, the Guyana government called on Suriname to honour its promise to Guyanese fishermen regarding the issuance of these licenses that should have been made available since January 1, 2022.