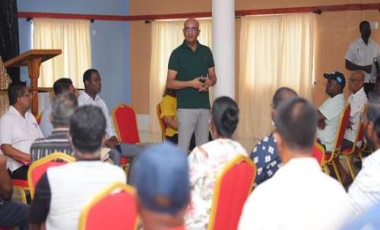 GEORGETOWN, Guyana, Apr 11, CMC – The Guyana government says it will continue holding talks with Suriname “at the highest level” as it seeks to obtain official licences in a bid to end the ongoing harassment of local fishermen.

Agriculture Minister Zulfikar Mustapha, who visited the neighbouring Caribbean Community (CARICOM) country last week for talks with officials there, told a meeting of fisherfolk on Sunday that while Suriname has committed to fixing the matter “they keep making commitment but are not delivering on those commitments.

“We are trying our utmost…when we raise these issues, they are making commitments and then nothing. It is beyond our control,” Mustapha said..

In August 2021, Guyana and Suriname came to an agreement that licenses will be issued directly to 150 Guyanese fishermen but that is yet to materialise although it was expected in January 2021.

Foreign Affairs Affair and International Cooperation Minister, Hugh Todd, told the meeting that the government will continue to have dialogue with Paramaribo.

“They (Suriname) have their own political issues and special interest…we are seeing progress on all other issues except the license but we will get it done despite the forces working against that.

“Government will keep you in the loop,” he sought to re-assure the meeting, adding that the delay “is not lack of effort on government’s end”.

Vice President, Dr. Bharrat Jagdeo, who also addressed Sunday’s meeting, said the matter remains a priority of the Irfaan Ali administration, and that the only move the administration can commit to presently, is advancing the pressure on the neighbouring country, at the highest level.

“There are a whole range of problems over there, we don’t control that, we wish if we could. We are in the same position that you are, a little helpless and it’s sad. I don’t want to admit it but it is true,” Jagdeo said.