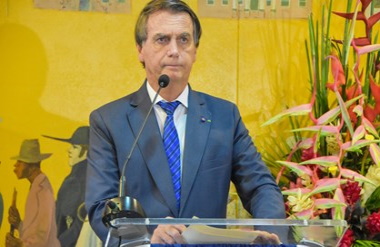 GEORGETOWN, Guyana, Jan 21, CMC – The Guyana government Friday announced that Brazilian President, Jair Bolsonaro, has cancelled his one-day official visit to the Caribbean country because of the death of his mother.

In a brief statement, the Ministry of Foreign Affairs and International Cooperation said it “regrets to inform that due to the sudden and unfortunate passing of the mother of His Excellency Jair Bolsonaro, President of the Federative Republic of Brazil, his official visit to Guyana will no longer take place today”

The statement said that President Dr Irfaan Ali, has extended “heartfelt sympathy to his colleague on his sad loss”.

On Thursday, President Bolsonaro held discussions with his Surinamese counterpart Chandrikapersad Santokhi in Paramaribo indicating that he would wish for the Brazilian oil company Petrobras to play a significant role in oil and gas explorations off the Surinamese coast.

After the two leaders had signing a cooperation agreement, Bolsonaro indicated that Petrobras has a lot of experience in the field of oil exploration and production and that closer cooperation between Suriname and his country will benefit the peoples of both countrie.

“Brazil has a huge amount of experience in oil exploration and wants to make it available to Suriname. I welcome the consultation we have had and we hope that Petrobras will also be visibly present to work together on oil and gas exploration,” he said.

Bolsonaro said further that his country also wants closer cooperation with Suriname on infrastructure development and integration between the two countries.

“I am convinced that our peoples will benefit immensely from this,” Bolsonaro said in his brief statement.

President Santokhi said that the discussions with his Brazilian counterpart took place in a friendly atmosphere based on the mutual interests of the two countries.

He said that Suriname and Brazil are not only geographically linked, but also have a strong historical and cultural link with each other and that the two countries have maintained diplomatic relations for 45 years. Bilateral relations have only grown stronger over the years. Relations are also excellent at regional and multilateral level.

“”Today we have decided to resume regular consultations within the framework of the bilateral mechanism of political consultations, which started in 2005,” said President Santokhi.

“Currently, 25 collaborative projects are on the agenda, some of which are already underway while others are ready to be signed. Some are still being prepared and discussed. These projects focus on capacity building in agriculture, education, natural resources, public administration, health care, cybersecurity, ICT and justice.”

He said Bolsonaro’s visit was aimed at further strengthening and expanding strategic cooperation between the two neighbouring countries.