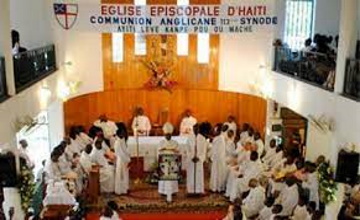 PORT AU PRINCE, Haiti, Dec 24, CMC – The Episcopal Conference of Haiti (ECH) Friday expressed concern at the ongoing economic, political and security crisis in the French-speaking Caribbean Community (CARICOM) country calling on the authorities to assume their responsibilities while  international community not to abandon the Haitian people.

“We cannot remain indifferent to the tragic events of these last months”, the bishops said in their Christmas message.

“Such a situation of socio-economic and political chaos should it not challenge the conscience of those who have responsibilities” at the local and international level, they declare, saying they are alarmed by” a catastrophic context which shows no sign of slowing down.”

The bishops said very soon the country will be celebrating the celebrate birth of Jesus Christ “and we will have to exchange the traditional Christmas and Happy New Year wishes.

“The time of Advent, as a time of waiting, conversion, reconciliation, sharing and hope, we prepares. It opens the horizons towards a wider and nobler ideal of life. By means of concrete gestures, the Church invites us to come out of our indifference to better welcome Jesus Christ and submit us to his Lordship.

“She asks us to open our hearts, hands and eyes to go to the similar and decide to walk with him. What acts of patriotism and social friendship would we like to realize to activate the process of pact of brotherhood and governance that Haiti needs?

They said that the church has a duty to support “and to always accompany his sons and daughters in their sorrows as in their joys, in their anxieties as in their hopes” and as pastors of the flock, “we cannot remain indifferent to the tragic events of these last few months.

“While we sympathize with the pain of all those who are victims of acts of kidnapping, rape and violence of all kinds, let us entrust to the mercy of God the souls of our innocently fallen brothers and sisters under the bullets of heavily armed groups. Our sympathies and sincere condolences go out to all the grieving families.

“Of all our forces, we condemn these fratricidal acts. We demand that the truth, the order and the justice be restored and that the authority of the state be restored in our country.” the bishops added.

They recalled that Pope Francis, during the Angelus prayer on October 31 had a very special thought for Haiti, our Country, “which lives in extreme conditions”.

“The Holy Father solemnly asked “those responsible for nations to support this country, not to leave it alone” in this moment of hardships where we know so much suffering and pain. Indeed, many of our compatriots are forced to leave the country thinking that they can find well-being elsewhere to which they aspire.

“Unfortunately, they are very often victims of ill-treatment and discrimination. In communion with the Holy Father, we deplore these events and ask that the principles related to respect for the dignity of the person they are applied for all. We express our gratitude to the Holy Father for his vibrant message of solidarity,” the bishops said.

They said they were launching “an urgent cry of alarm in the face of the worrying continuous deterioration of the situation of the country.

“Should such a situation of socio-economic and political chaos not the conscience of the leaders of the international community fo work in synergy to help us heal this wound and to promote the respect for universal rights? And don’t our political leaders, our leaders, feel they too are more than ever concerned by this chaotic and disastrous situation that belittles?

The Conference of Catholic Bishops of Haiti said they were also calling for “personal conscience and collective, as well as to a moral and patriotic surge to combat the “forces proud of the evil that generates around us and in ourselves the atrocities and suffering.

“We urge political, social and economic actors in the sense of responsibility, to understanding and peace, to find a final and lasting solution to the crisis that has been going through the country for too long.

“To the leaders of armed groups and those who finally, we ask to lay down our arms to contribute to the reconstruction of a more just, humane and fraternal society. With brothers, we do not dialogue with weapons in hand. We look into each other’s eyes. We forgive each other and move on.”

“Let’s prove to be daughters and sons of the same homeland, Haiti. Let’s welcome, in the light of faith, the mystery of Christmas, the mystery of God who, in his Son, became flesh for to make us participants of his divine nature, to make God to man and man to God

“”Let us be transformed by the Godchild who invites us to open ourselves to hope”, the bishops added.