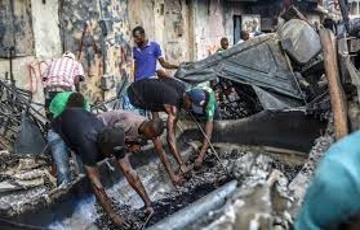 “I want to express on behalf of the Community my profound sorrow at the loss of life as a result of the explosion of a gas tanker in Haiti’s second city Cap Haitien. More than 50 people have been confirmed dead with the numbers rising,” Barnett said, prior to the start of a regional news conference, adding “as more information comes in the Secretariat will be issuing a statement of condolence”.

Pope Francis has also commented on the accident saying “poor Haiti… One trial after another… It is a people who are suffering. Let’s pray, pray for Haiti, they are good people, religious people, but they are suffering so much.

“I am close to the inhabitants of this city and to the families of the victims as well as the wounded. I invite you to join me in praying for our brothers and sisters who suffer so much,” the Pontiff said.

The Mayor of Cap-Haitien, Yvrose Pierre, said he is “appalled by the tragedy that affects our city after the explosion of this tanker.

Former First Lady Martine Moïse, also expressed sadness, saying “In this period of mourning, I extend my condolences to the families of the victims. Cap-Haitien, know that I will always be with you in good and bad days.”

Former president, Michel Martelly said the tragedy of Cap-Haitien, in Samarie, “did not leave me indifferent. I offer my condolences to those who are suffering on hospital beds. May the souls of each victim rest in Peace”.

The Secretary General of the Organisation of American States (OAS), Luis Almagro said the hemispheric body “expresses its solidarity and deepest condolences to Haiti in the face of this tragedy in the country”.

Prime Minister Ariel Henry has declared three days of mourning “in memory victims of this tragedy”.

He said field hospitals deployed in Cap-Haitien to provide necessary care to the victims of this terrible explosion.”

Early reports indicate that the tanker was trying to avoid an oncoming motorcycle when it veered and flipped early Tuesday.

Most of those killed were local residents who rushed to retrieve fuel from the overturned truck. The fire spread, setting fire to vehicles, motorcycles and at least 30 houses nearby.

Hours after the blast, buildings and overturned vehicles were still smoking as firefighters covered burned bodies in white sheets and loaded them onto the back of a construction truck.

Haitians for months have been scrambling to find gasoline amid shortages that have shuttered gas stations, sent fuel prices spiralling on the black market and forced businesses to close.