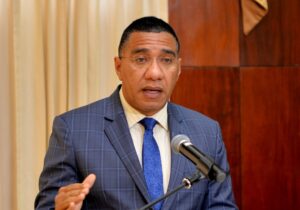 KINGSTON, Jamaica, Jan. 9, CMC – The government of Jamaica on Sunday declared as a Zone of Special Operations (ZOSO), the  Corporate Area community of Parade Gardens in Central Kingston.

The declaration was made on Sunday morning by Prime Minister Andrew Holness during a virtual press conference.

Also speaking at the press conference was Police Commissioner Major General Antony Anderson who said that ZOSO was implemented as Parade Gardens recorded 79 murders in 2021, which is a 55 per cent increase in murders when compared to 2020.

The number of murders made the Kingston Central Division the division with the second-highest increase in murders.

According to Anderson,  the murders in the area were  largely perpetrated by two main gangs with support from affiliate gangs in surrounding communities.

He described the gangs as ruthless with no concern for the vulnerable, including children, pregnant women, and the elderly.

The Zone of Special Operations is also expected to affect other communities in the area.

The press conference was held  as the country battles the fourth wave of COVID-19, with a record number of nearly 1,600 new cases reported on Saturday, and hospitalisations increasing.

There is also high concern about the country’s murder rate. Although major crimes declined by eight per cent in 2021, murders rose sharply by 10 per cent to 1,463.