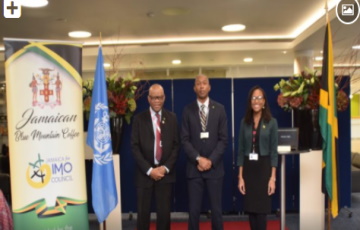 KINGSTON, Jamaica, Dec 15, CMC – Jamaica has been re-elected for a seventh term to serve in Category C of the Council of the International Maritime Organization (IMO).

The Council is the governing body of the IMO when the Assembly, which meets biennially, is not in session.  It approves the work of the various committees, proposes the budget, appoints the Secretary General for the Assembly’s approval, and makes policy recommendations including the IMO’s strategic plan.

The re-election of Jamaica, for another two-year term, took place last Friday during the ongoing IMO’s 32nd Assembly, which ends in London on Wednesday.

Transport and Mining Minister, Robert Montague, who addressed the Assembly, virtually, expressed Jamaica’s commitment to providing leadership within the region.

“Jamaica has always taken its responsibility in the maritime space very seriously and will continue to do so. We are leaders and we must speak for other countries, particularly in the Caribbean, which may not have as strong a presence in the space.

“I am humbled by the level of respect accorded to Jamaica as a maritime State by our peers, having re-elected us to serve on this impressive body,” he added.

Montague said that the “people and government of Jamaica continue to observe the highest standards for our flag ships, valued seafarers and port facilities.

“We will continue to cooperate and provide technical assistance to our regional partners, Small Island Developing States (SIDS) and Least Developed Countries in the true spirit of IMO cooperation,” he said.

Montague pointed out that given the impact of climate change, Jamaica remains ready to assist its Caribbean partners and to collaborate with the IMO to find viable solutions to reduce emissions.

“Jamaica remains mindful of the vulnerabilities of our location but also our responsibilities to join with the international maritime community to preserve and protect the marine environment and the blue economy,” he said.