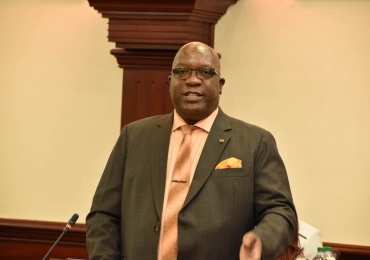 BASSETERRE, St. Kitts, Dec 15, CMC – Prime Minister Dr. Timothy Harris has presented an EC$1.5 billion (One EC dollar=US$0.37 cents) budget to Parliament saying that the measures contained in the fiscal package are designed to “setting the wheels in motion to advance our plans to get St Kitts and Nevis back on track.”

Harris told legislators that the economies in the Eastern Caribbean Currency Union (ECCU) of which St. Kitts-Nevis is a member, had recorded a decline in real gross domestic product (GDP) of 14 per cent in 2020.

He said the decline in economic activity was attributed to significant contributions in key sectors and that tourism fell by 63.2 per cent.

“Across the Currency Union member states suffered a decline in economic activity ranging from 2.7 to 23.8 per cent,” Harris said, adding that the “2022 growth prospects within the Currency Union are now at 6.9 per cent and would be contingent on a number of variables.”

But he told legislators that “positive in the context of the predictions of the International Monetary Fund (IMF) and the Statistics Department, the country will grow in double-digit terms.”

Harris said that total revenue and grants will be just over EC$430 million and from taxes, “we will generate EC$460 million and EC$15.5 million via development aid” and that he is not anticipating having to take on debt

“If all things remain the same we anticipate we will realise an overall surplus of four million dollars, a primary surplus of EC21.8 million for the fiscal year 2022.”

He said the government anticipates eliminating the need to borrow and “we will allow the government to attain the goal of a 60 per cent debt to GDP ratio by 2023.

Harris said that recurrent revenue is estimated at EC$853 million and recurrent expenditure is pegged at EC$723 million and that the government is on target to realize an improvement in the economy.

Harris said that National Security continues to be a top priority for the coalition government adding that EC$80.1 million had been allocated to that ministry.

“We will continue our efforts to keep the country safe and none can deny that St Kitts and Nevis in 2021 is far more at peace and far safer than it was up to 2014. The primary responsibility of the state must be to protect the people from harm. When it comes to national security preserving the peace we make no apology for investing.”

Harris, who is also the Finance Minister, said that funds allocated to healthcare will help to provide necessary resources to allow for the employment of additional medical professionals and equipment.

“The future for our health systems look promising and we can take comfort that our investments which have been proposed will lead to 2022.”

In his presentation, Harris said that the twin island Federation is working towards seizing all opportunities regarding the cannabis industry.

“Our Federation will seek to collaborate with neighbouring islands in the sub-region and wider Caribbean as well as to establish relationships with global cannabis professionals and entities to build a thriving cannabis industry here.”

Harris noted also that the ability of the Federation to weather the economic storm caused by the pandemic was significantly influenced by the continued success of the Citizenship by Investment Programme (CBI) that allows for foreign investors to be granted citizenship in return for making a significant investment in the socio-economic development of the Federation.

Harris said that the CBI programme has maintained its ranking as one of the best in the industry and that it has received the highest score in the citizenship timeline pillar as a result of the accelerated application process.

“We have transformed our CBI we have come a long way from the difficult period in 2014. The robust procedures that are embedded in the program have enabled us to maintain our platinum brand and has ensured we take a significant share in the major markets around the world.”

Harris told legislators that the tourism sector has borne the full brunt of the economic fall out of the coronavirus (COVID-19) pandemic.

Harris noted experts in the travel industry are hopeful for a return to pre-pandemic global travel levels by 2023.

“My government has initiated a strategy for putting the tourism sector back on track. Our strategy is designed to allow the sector to act as a catalyst for substantial economic growth and development through the creation of employment, spurring entrepreneurship and infrastructure development.”

Regarding the a agricultural sector, Prime Minister Harris said that the goal of the government is to produce more of what is consumed and it continues to align with the commitment to making strides in achieving sustainable development goals.

“The injection of boost the production of the agricultural sector ensure greater food security has helped in this regard. Month after month we have had strong positive returns in crops, livestock and in the fisheries sector.

“We are happy our stimulus package has aided our fisherfolk and farmers in making progress and earning better livelihoods.”

Harris said in the medium term, the outlook for the construction sector is positive with a growth rate of 11.7 per cent in 2022.

“We are working to ensure the construction sector is back on track in 2022 and sustained in the medium term.”