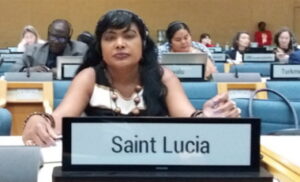 The island’s National Focal Point for the Escazu Agreement, Kate Wilson, together with the Permanent Secretary of the Department of Sustainable Development, Anita Montoute, are attending the three-day event.

Wilson said that cabinet had recently endorsed and adopted the concept note ahead of the observance of the International Day of Mother Earth, later this month.

St. Lucia became the 12th signatory to the Escazu Agreement in 2018 and approved ratification on December 2 last year.

“Endorsement and adoption of the Concept Note by Cabinet Conclusion 177 of 2022 is another demonstration of St Lucia’s lead in efforts to mainstream access rights to environmental information and justice, swiftly taking steps to put the legislative and institutional framework and the public awareness and sensitization in place to ensure optimal realization,” according to the Ministry of Sustainable Development.

It said implementation of the Escazu Agreement will receive continued support from the United Nations Economic Commission for Latin America and the Caribbean (ECLAC). The ministry said that a review of local legislation to facilitate implementation has since been conducted by the World Resources Institute (WRI).

The Regional Agreement on Access to Information, Public Participation and Justice in Environmental Matters in Latin America and the Caribbean, is commonly termed “The Escazu Agreement” because it was adopted and endorsed in the Costa Rican town, Escazu.

This Agreement is the only treaty emanating from the Rio + 20 Conference which fulfills the application of Principle 10 of the Rio Declaration on Environment and Development.