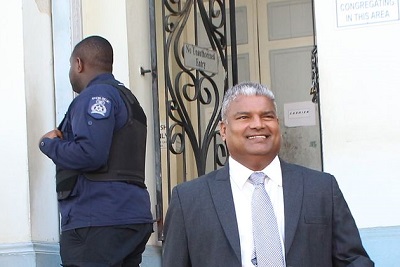 PORT OF SPAIN, Trinidad, Sept 19, CMC – Chief Magistrate Maria Busby Earle-Caddle, Monday adjourned to January next year, the case against former attorney general, Anand Ramlogan, SC, who was charged in 2017 with misbehaviour in public office and obstruction of justice.

The magistrate during the virtual hearing ruled that a status hearing will be held on January 9, 2023, with the delay due to Ramlogan filing a constitutional matter in July this year when he had been expected to have gone on trial.

In his constitutional matter, Ramlogan, who served as attorney general here from 2010-15, is arguing that the police wrongfully used the warrant process and that the judge who signed off on interception orders did so on the basis of apparent bias.

When the matter came up for hearing on Monday, the court was told that the constitutional matter had been adjourned to November 4, at which time Justice Nadia Kangaloo is expected to give further directions for a full hearing.

Although the attorneys for Ramlogan and the state asked for a November or December date for the status hearing, the Chief Magistrate adjourned the matter to January 9, saying that the only “bugbear” delaying the start of the matter before her was the High Court matter, since everything has already been filed by the prosecution.

The case against Ramlogan centres on an allegation by the director of the Police Complaints Authority (PCA), David West, that he had been approached by Ramlogan to withdraw his witness statement in a defamation case against then Opposition Leader, Dr Keith Rowley in 2014.

Ramlogan is accused of obstructing justice by using threats and bribery to persuade West not to give evidence in Ramlogan’s defamation case against Rowley. He is also accused of misbehaving in public office by improperly trying to prevent West’s testifying on Rowley’s behalf.