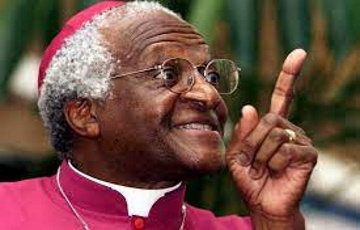 Clarke, who represents the primarily Caribbean 9th Congressional District in Brooklyn, told the Caribbean   Media Corporation (CMC) “what a great loss for the world and mankind”.

The Congresswoman said the 1984 Nobel Peace Prize winner was the Commencement Speaker at her graduation from Oberlin College, a private liberal arts college and conservatory of music in Oberlin, Ohio.

She said Tutu was “a leader and true inspiration in the Global Racial Justice movement.

“I have powerful and indelible memories of Archbishop Tutu’s passion for justice as Commencement Speaker,” said Clarke noting that “this would be the first of several encounters with him over the year.

“He was truly an inspiring leader. He is leaving behind a legacy that will not only shape generations to come but continue to be transformative, as we advance the movement for a more just and equitable world,” Clarke said.

New York City Councilman, Haitian-born Dr. Mathieu Eugene described Tutu as “a true spiritual icon,” and that Archbishop Tutu was “a leader in the anti-apartheid movement, and a true spiritual icon who, despite many obstacles, dedicated his life to the fight for freedom and justice for all of humanity.

“Bishop Tutu will be remembered as a tireless advocate and voice for those who lived under systematic oppression, and a trusted source of wisdom who understood the need for unity and peace in the face of intolerance and discrimination,” said Eugene, representative for the predominantly Caribbean 40th Council District in Brooklyn.

“His legacy will live on in all who believes in the value of partnerships and respect that help us work together towards the common good as human beings,” he told CMC. “May God bless his family during this very difficult time.”

New York City Mayor-elect Elect Eric Adams, who will assume office on January 1, 2022, said the passing of Archbishop Tutu is “a heart-breaking loss for our global community.

“A champion of civil rights whose voice brought down apartheid in South Africa and advanced the fight for human and economic justice throughout the world, Archbishop Tutu’s advocacy resonated across generations, cultures and communities,” said Adams, who will become the second Black Mayor of New York City after the first, the late David Dinkins.