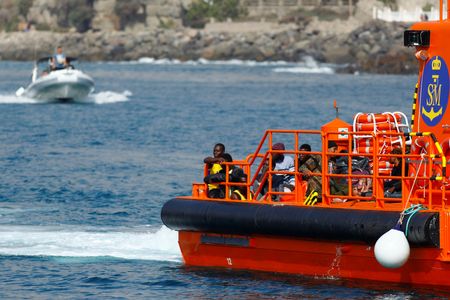 BARCELONA (Reuters) – More than 4,400 migrants, including at least 205 children, were lost at sea trying to reach Spain in 2021, a monitoring group said on Monday – more than double the figure from the previous year and the most since the group began counting in 2018.

The group, Walking Borders, or Caminando Fronteras, blamed increasingly dangerous routes, inferior boats and the fear of some vessels to help migrants at sea for the surge in deaths. According to Spanish official statistics, 39,000 undocumented migrants successfully reached Spain by sea or land last year, a similar figure to the previous year.

Walking Borders said more than 90% of those missing or dead were lost on 124 shipwrecks en route to Spain’s Canary Islands in the Atlantic Ocean as of Dec. 20. Since 2020, the islands off the coast of Africa have become the main destination for migrants trying to reach Spain, with a much smaller share trying to cross the Mediterranean Sea to the Spanish mainland.

Helena Maleno, founder of Caminando Fronteras, told Reuters the group gathered its data from hotlines set up for migrants on vessels in trouble to call for help, and from family members seeking information.

The group investigates the fate of each boat. It presumes those missing at sea for at least a month to be dead. Close to 95% of the figures represent people who are missing.

The United Nations International Organization for Migration (IOM) counted 955 people who died or went missing in 2021 trying to reach the Canary Islands by Dec. 22, the highest figure it documented since 2014.

The IOM obtains its data from officials records, media reports and other groups including Walking Borders, but says its numbers are conservative and the real toll is probably higher.

Spain does not keep figures for people who die trying to reach its shores, and an Interior Ministry spokesperson declined to comment on the latest figures.

(Reporting by Joan Faus from Barcelona, Emma Pinedo and Nathan Allen from Madrid; Editing by Aislinn Laing and Peter Graff)