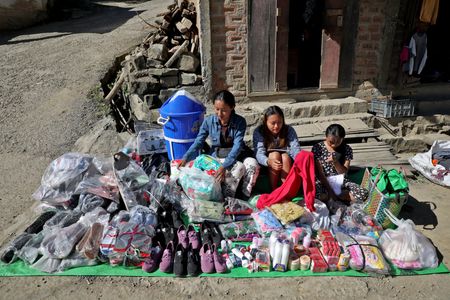 By Devjyot Ghoshal and Chanchinmawia

FARKAWN, India (Reuters) – For more than a decade, Mah Tial said she ran a small store in Thantlang, a town in northwest Myanmar, making enough money to send her four children to school and see her eldest daughter secure a coveted government job.

On Sept. 8, the 51-year-old said her peaceful life in the hilltop settlement ended suddenly when Myanmar’s military attacked and burned down houses, forcing the family to flee and shelter in neighbouring India’s Mizoram state.

Along with her husband, children, parents and an aunt, Mah Tial now lives in a shack made of corrugated metal sheets and wood clinging to a mountainside in Mizoram’s Farkawn village.

“I don’t think about going back to Myanmar soon, because the condition inside the country is getting worse,” she said.

Myanmar was plunged into crisis when the military ousted the civilian government of Aung San Suu Kyi on Feb. 1, triggering protests and conflict in the countryside between anti-junta militia and the army.

Located in Myanmar’s Chin state, where an armed rebellion has taken hold, Thantlang has seen repeated attacks by the military, also known as the Tatmadaw, since early September, according to three former residents and a rights group.

Myanmar’s military spokesperson did not respond to a request for comment on recent events in Thantlang. The military has previously blamed insurgents for instigating fighting and burning homes there, and brands them terrorists.

Mah Tial’s family is among what a Mizoram lawmaker estimated were around 15,000 Myanmar nationals sheltering in the state.

Several days a week, she and her three daughters sit at Farkawn’s main crossroads selling plastic slippers, cosmetics and diapers – goods ordered for her shop at home that she managed to bring into India.

Years of savings have been wiped out, Mah Tial said.

“I am mentally prepared to stay as a refugee,” she said.

Across Chin, fighting in the wake of the coup has displaced more than 20 percent of the state’s population of around 500,000 people, said Salai Za Uk Ling of the Chin Human Rights Organisation (CHRO).

The Myanmar military did not comment when asked about the figures, which Reuters could not independently confirm.

Some have crossed into Mizoram, which has close ethnic ties with areas of Chin and where the state government has extended support for those fleeing Myanmar.

In mid-December, Mizoram’s Chief Minister Zoramthanga met ousted Myanmar lawmakers and promised them his government would continue to help those seeking shelter in the Indian state.

Zoramthanga, who uses one name, said the federal government was unable to help Myanmar nationals because India is not a signatory to the UN Refugee Convention.

International aid groups could step in, he added, even as local organisations have provided most support so far. Foreign aid hasn’t reached Farkawn.

In Farkawn, a settlement of around 4,000 people, residents banded together to help around 1,100 Myanmar nationals who crossed over since February, village council president Lalramliana said.

Dozens have been accommodated in temporary shelters made of thin tarpaulin sheets and bamboo poles, with village residents and donations from across the state helping provide essentials like food, firewood and clothes.

But Lalramliana said he was worried as donated supplies were running out.

Mah Tial said she hoped India would provide a legal pathway for her three older daughters to travel to a third country for education or employment.

“We cannot undo the past,” she said. “I am concerned about my children. I want to give them a better life.”