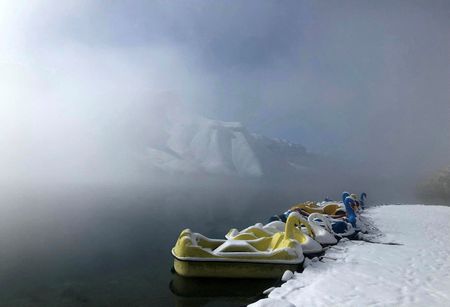 BAMIYAN, Afghanistan(Reuters) – The winter landscape around the deep, blue mountain lakes of Band-e-Amir in the central Afghan province of Bamiyan presents an arresting spectacle empty of people – but the absence of visitors is costing locals dearly.

After two decades of war and facing its worst economic crisis, the collapse of Afghanistan’s vestigial tourism industry might almost go unnoticed.

But Band-e-Amir, about 3,000 metres (9,840 feet) above sea level and a couple of hours’ drive from the Buddhist sites of Bamiyan, usually attracts thousands of visitors a year seeking respite from the conflict.

All that changed last year as the Taliban swept through one province after another, culminating in the shock overthrow of the Western-backed government in Kabul in August and plunging the economy into crisis as foreign aid dried up.

“It used to be very good, there were skiing programmes and competitions in the winter,” said Sayed Reza, a tourist guide who also rents out rooms to visitors.

“There used to be so many tourists in the winter and spring, but since Taliban came, in the last four months we have not seen any tourist in Band-e-Amir,” he said.

Bamiyan province was one of the rare places that remained sheltered from the conflict that ripped much of Afghanistan apart over the past 20 years. It developed a relatively liberal culture in which mountain sports played a significant role.

The skiers and cyclists on the slopes and roads, as well as the thousands of picnickers and sightseers enjoying the natural beauty offered a vision of carefree peace in stark contrast to the violence elsewhere.

The area was declared a national park in 2009 and although Bamiyan as a whole remains generally poor and underdeveloped, the tourism that continued during the years of war has left clear signs of prosperity in the little village by the lake.

Reza said the 70 to 80 families living in Band-e-Amir village depend entirely on tourism and are already suffering from the slowdown in visitors caused by the pandemic. The economic crisis that followed the Taliban victory has done the rest.

“This year, due to the change in regime we have not seen any tourists in Band-e-Amir,” Reza said.

(This story refiles to clarify time element of Taliban takeover)