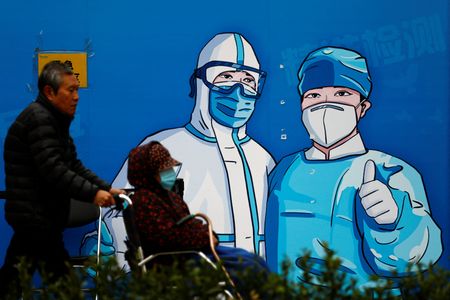 SYDNEY (Reuters) – A record $3.3 billion in aid flowed to the Pacific islands in 2020 as the COVID-19 pandemic hit, a 33% increase on the previous year, according to a report released by the Lowy Institute think-tank on Monday.

The pandemic led to border closures, confronting governments reliant on tourism with economic crisis. It also brought a shift in how aid was delivered, with more loans than grants made, and more direct funding to help deliver critical services.

The Lowy Institute’s annual Pacific Aid Map showed Chinese aid to the region dropped to $187 million in 2020, its lowest since the institute began tracking aid flows in 2008.

Australia and New Zealand provided a third of all aid in 2020.

The map tracks development assistance to the Pacific islands, an effort the Institute says increases transparency of money flows, as China and the United States and its allies vie for influence in the strategically important region.

A move by the Solomon Islands to sign a security pact with China in 2022 has alarmed Washington and its allies, including Australia.

The project director of the Pacific Aid Map, Alexandre Dayant, said development assistance remained a diplomatic tool for Beijing, with regional aid focusing on Kiribati and Solomon Islands, which switched diplomatic ties from Taiwan to Beijing a year earlier.

Dayant said the overall drop in Chinese aid in the region comes amid negative publicity about the cost of Chinese infrastructure loans, and Pacific island nations having more choice.

Australia, which has committed A$600 million in infrastructure loans since 2019, is becoming a prominent Pacific lender and needed to take “considerable care” it did not contribute to the region’s debt problems, the report said.

Australia last week said it would spend another A$900 million ($576.99 million) in Pacific aid.

The United States has also pledged $800 million more after hosting a dozen Pacific islands leaders at a White House summit in September.

(This story has been refiled to fix typo in paragraph 2)