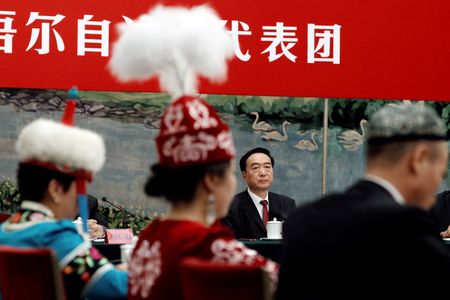 SHANGHAI (Reuters) – China’s change of leadership in Xinjiang could indicate greater emphasis on economic development in the region, experts said, although its security crackdown targeting minority Muslims is unlikely to see a significant change in direction.

On Saturday, the official Xinhua news agency reported that Chen Quanguo, whose heavy handed security campaign in the western region drew international sanctions, had been replaced after five years.

Chen, 66 and a member of China’s Politburo, a top policy-making body, was succeeded as Xinjiang Communist Party secretary by Ma Xingrui, who was governor of Guangdong. Analysts said Ma’s stewardship of Guangdong, China’s largest provincial economy, may point to why he was chosen.

“I suspect one rationale behind this appointment is to signal ‘normalcy’ in Xinjiang, though it will not be normal there, and to stress ‘economic development’ of the region,” said James Millward, professor of history at Georgetown University.

The United States has labelled China’s treatment of ethnic Uyghurs and other Muslims in Xinjiang as genocide. The United States and a few other countries plan a diplomatic boycott of the Beijing Winter Olympics in February over the issue.

U.N. experts and researchers have estimated that more than a million ethnic Uyghurs have been detained in internment centres since 2016.

China rejects all accusations of abuse and says its policies in Xinjiang are necessary to eradicate extremism. In late 2019, Beijing said all those who had been in what it called “vocational training centres” had “graduated”.

Asked by Reuters if the change in leadership in Xinjiang was made in response to international pressure or if it signals a change in policy for the region, China’s foreign ministry said, “this matter is a normal personnel change in China

Chen was seen to have “completed his mission” in Xinjiang, said Wu Qiang, a Beijing political analyst and former Tsinghua University lecturer who was among analysts who believe Chen could be rewarded for his work there with a promotion in the wider reshuffle ahead of next year’s Communist Party Congress.

Chen had previously been party chief in Tibet, another restive border region, where he honed some of the tactics used in Xinjiang.

Xinhua said Chen will move to another role but did not give details.

“I believe that Xinjiang’s policies will indeed experience some adjustments, for example, stressing development and starting to pay as much attention to development as stability,” Wu said.

This year, for example, China stepped up promotion of Xinjiang as a destination for domestic tourists.

Experts said that while Ma, an aerospace engineer and former industry executive, may have been chosen for his economic credentials, the move does not indicate a change in direction: Chen had implemented the measures in Xinjiang, but China’s broader approach was spearheaded by President Xi Jinping.

In a speech on Saturday, Ma, 62, said that he would “persist in taking social stability and long-term stability as the general goal of Xinjiang’s work,” according to state media, indicating continuity with Chen.

During a visit to the Xinjiang International Grand bazaar in the provincial capital Urumqi on Monday, Ma said “high quality” economic growth would be a focus of his tenure.

“We must modernise supply chains,” Ma said, according to a Xinjiang Daily report.

“We must deepen reform of ‘decentralization and management of services’, promote tax and fee reduction, create a good market-oriented, rule-of-law, and international business environment.”