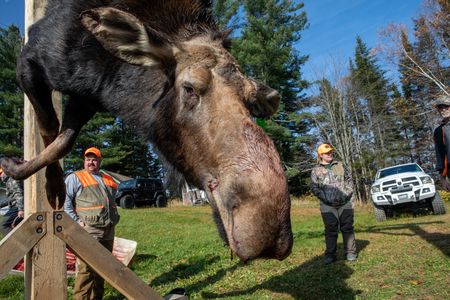 PITTSTON ACADEMY GRANT, Maine (Reuters) – Shorter winters in Maine’s woodlands have created a huge problem for the state’s iconic moose, in the form of tiny blood-sucking ticks that thrive in warmer weather and which last year killed nearly 90% of Maine moose calves.

Now the northern New England state is studying a counter-intuitive solution to the climate-driven problem: can Maine help its moose population by allowing big game hunters to kill more rather than less of them each autumn?

“We’ve seen that areas with lower moose density tend to have healthier moose with fewer ticks,” said state Moose Biologist Lee Kantar, who is running the study. “The ticks can’t survive without a host.”

Maine’s messy dilemma reflects how climate change is transforming biospheres the world over by expanding the northward range of parasites. If Maine’s effort to tackle its problem by increasing hunting works, it could provide a model for other regions facing similar problems.

At issue is the winter tick, a tiny creature that has flourished in Maine and other northern states and Canadian provinces as climate change provides it more time to find warm hosts to latch onto before the onset of frost that would otherwise kill it.

In Maine, the warming climate has shortened the winter by between one to two weeks compared to a century ago, according to Sean Birkel, the state climatologist and assistant professor at the University of Maine Climate Change Institute and Cooperative Extension.

Those extra weeks of frost-free weather mean a moose meandering in the brush can acquire tens of thousands of more ticks on its coat than it would otherwise. And over a winter, those ticks will drain vast amounts of its blood at a time it is already contending with cold, deep snow, and low seasonal food supplies.

Other woodland animals, like deer or snowshoe hare, are better than moose at removing the ticks by scratching or rubbing up against trees, leaving the moose – the largest creature in the local forest – to suffer the brunt of the tiny predator, said Kantar.

“For whatever reason, moose are no good at getting rid of the ticks,” he said.

An adult moose can generally survive the tick onslaught because of its size and strength. But younger moose suffer badly. In six of the past seven years, more than half of moose calves tracked by the state died before reaching a year old, said Kantar. And last year in northern Maine, 87% died.

Ticks can also weaken female moose to a point where they are unable to successfully reproduce, he said.

Maine’s moose population is currently the largest of all the lower 48 states at over 60,000 animals, according to state figures, thanks to an ideal habitat and careful management of the annual moose hunt. But the numbers have been declining, and the tick threat risks sending it downward sharply.

Kantar is now leading research to test whether thinning the moose population through increased hunting can help. That study involves expanding the hunt in one Maine region to see if there’s evidence that moose surviving the hunters’ guns there will end up with fewer ticks.

It is unclear, he said, what an ideal moose population would be for Maine but he hopes the study will help answer that.

In the meantime, he said his office had received many public comments questioning the strategy and arguing shooting more moose defeats the purpose of trying to save them.

“It is counter-intuitive to increase the harvest. I understand that,” Kantar said. “Unfortunately, we’re in a tough spot because the only solution we see is this experimental reduction… That’s not a happy answer for people.”

Each year, the Maine moose hunt draws around 50,000 applications in a lottery for the 2,000 to 3,000 moose permits typically issued. That can yield millions of dollars to the state in application and permit fees and tax revenues from the tourism industry.

Kantar said just over 4,000 permits were issued for the moose hunt this fall, a figure he said his office recommended based on science, not money. “Economics and money have zero part in what we do here,” he said.

Kantar said that other options for dealing with the tick problem – like spraying the forests with pesticides, or medicating the moose with injections or collars – aren’t feasible because of the vast habitat of moose and the difficulty finding and capturing them.

“These aren’t domestic dogs,” he said.