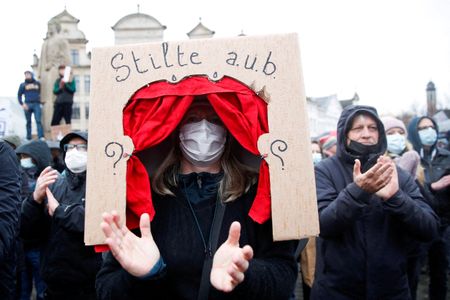 BRUSSELS (Reuters) – The Belgian government reversed course on Wednesday by allowing theatres to reopen after a court suspended their closure ordered a week ago to try to stem the surge in infections from the Omicron coronavirus variant.

The ruling from the Council of State did not cover cinemas, but the government said they too could reopen because they operate under the same conditions as theatres.

Prime Minister Alexander De Croo, ministers and regional chiefs met by video link on Wednesday before De Croo tweeted that the rules would be changed.

Theatres, cinemas and concert venues would be allowed to receive audiences of up to 200 people at a time, all seated and wearing masks and only allowed in with a COVID pass to prove vaccination, a negative test or a recent recovery.

The rule change would take effect from Thursday. Some cinema groups said they would restart then. Kinepolis, the largest operator of multiplex cinemas, said it would reopen on Jan. 1.

Other indoor venues, such as casinos and bowling alleys, will remain closed.

De Croo’s government and regional chiefs decided last week to close cinemas and theatres and play sporting fixtures behind closed doors, while allowing bars, restaurants, gyms and other indoor sports venues to continue as before.

Belgium, home to European Union institutions and the headquarters of NATO, has seen infections fall since a late November peak, but Omicron cases are rapidly rising, and now make up well over half of all COVID-19 cases.

Belgium has recorded 881 cases per 100,000 people over the past two weeks, less than half November’s peak.