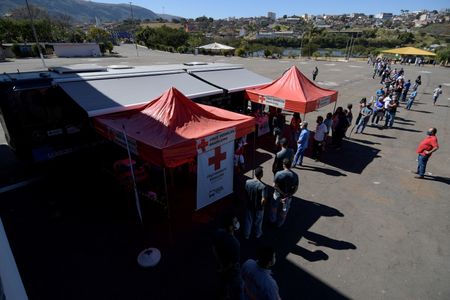 BRASILIA (Reuters) – Brazil’s Health Ministry said on Tuesday that most participants in a public hearing on vaccinating children aged 5 to 11 for COVID-19 disagreed with the need for a doctor’s prescription, but it will still recommend it.

The government of far-right President Jair Bolsonaro, a vaccine skeptic, has opposed the vaccination of children, even though Brazil’s health regulator Anvisa has authorized the use of vaccines developed by Pfizer Inc.

Several dozen Bolsonaro supporters demonstrated outside the hearing held at the Pan American Health Organization offices in Brasilia, protesting against the vaccination of children, accompanied by youngsters holding signs.

Experts told the hearing that the vaccines were not experimental and have been approved by Anvisa which authorized the Pfizer vaccine for children on December 16. Anvisa did not attend the hearing.

The ministry official in charge of fighting COVID-19, Rosana Melo, said the majority of 100,000 people who replied to a questionnaire online favored voluntary vaccination and giving priority to children with prior medical conditions, but they opposed the requirement of a medical prescription to get a shot.

This was one of the ministry’s decisions that could make it harder for vaccination of children to be implemented, along with the recommendation against mandatory vaccination.

Nevertheless, the final decision on vaccination is up to the state governments, not the federal one.

So far 20 of Brazil’s 26 states and the federal district have decided that they will not ask for a doctor’s prescription and the National Council of State Health Secretaries (CONASS) has advised that this requirement not be made.

The governors want to start vaccinating children before schools resume classes in late January. The first Pfizer doses for children are expected to arrive in Brazil on January 10.