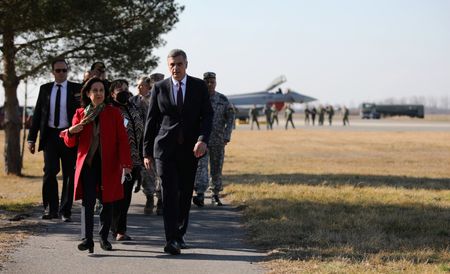 SOFIA (Reuters) -Bulgarian Prime Minister Kiril Petkov on Monday fired Defence Minister Stefan Yanev for his reluctance to describe the Russian invasion of Ukraine as a war, reiterating that Sofia would speak in one voice with the European Union.

Petkov said his centrist coalition government would ask parliament on Tuesday to approve Yanev’s dismissal and appoint Todor Tagarev, who was a caretaker defence minister in 2013, to the post.

“My defence minister cannot use the word operation instead of the word war. You cannot call it an operation when thousands of soldiers from the one and the other side are already killed,” Petkov said in a televised statement.

“The Bulgarian interest is not in bending our heads down…When we see something we do not agree with, something so obvious, we cannot keep quiet,” Petkov said.

Bulgaria is a member of the EU and NATO but many in the Balkan country – which was the closest Communist satellite of the Soviet Union during the Cold War era – feel a strong cultural and historical affinity with Russia.

Some fear that taking a very strong stance against the Russian invasion could hurt Bulgaria, which is reliant on Russian energy supplies and tourist inflows to its Black Sea summer resorts.

President Rumen Radev said the change of defence ministers in the midst of a military crisis not far away was risky and the ruling coalition would be responsible.

Bulgaria has pledged to bolster NATO’s eastern flank and lead a battle group in cooperation with NATO, but comprised mainly of Bulgarian troops. Analysts say Yanev’s replacement may spur the deployment of more troops of NATO allies in Bulgaria.

“Bulgaria will not transform into an anti-Russian hawk in NATO, but will follow the tone set by Petkov for a clearer voicing of the Bulgarian position in NATO against the aggression in Ukraine,” political commentator Ivo Indzhov said.

In a Facebook post late on Sunday Yanev wrote that he was the subject of a targeted attack aimed at replacing him with someone who would be more open to taking decisions that serve foreign interests, which could put Bulgaria’s security at risk.

Petkov slammed Yanev’s statement saying neither of his ministers had the right to “their own foreign policy, especially on Facebook”.

Petkov said Bulgaria was not forced to take any decisions by its Western allies but stressed that the biggest guarantee for the country’s security lay in standing united with its EU peers.

Separately, the foreign ministry said on Monday Bulgaria had evacuated the staff of its consular mission in the Ukrainian Black Sea city of Odessa.