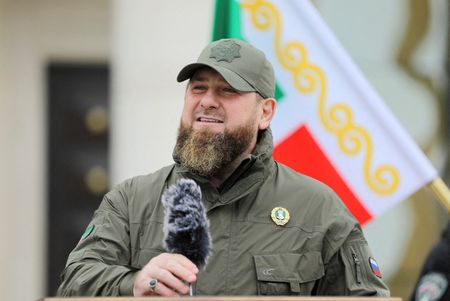 LONDON (Reuters) -Ramzan Kadyrov, the powerful head of Russia’s republic of Chechnya, said on Wednesday that Moscow would make no concessions in its war in Ukraine, deviating from the official line and suggesting the Kremlin’s own negotiator was wrong.

Kadyrov, who has Chechen forces fighting in Ukraine as part of Russia’s military operation, said in comments on Telegram that President Vladimir Putin would not simply stop what he had started there.

He spoke after Vladimir Medinsky, Russia’s chief negotiator, said following talks with Ukraine on Tuesday that Moscow was taking steps to de-escalate the conflict, including scaling back military activity around Kyiv.

“We will not make any concessions, it was … Medinsky who made a mistake, made an incorrect wording… And if you think that he (Putin) will quit what he started just the way it is presented to us today, this is not true,” Kadyrov said.

Kadyrov, who rose to power in the mainly Muslim southern Russian region of Chechnya in the wake of two brutal wars after the Soviet Union’s collapse, has often described himself as Putin’s “foot soldier”. Moscow has poured in huge sums of money to rebuild the region under him.

Though he wields outsize power and is one of the country’s most influential regional chiefs, his statements contradicting Medinsky by name were highly unusual on such a sensitive subject as the war.

“This is of course a serious problem for Putin,” said Tatiana Stanovaya, a political analyst, on Telegram.

(Reporting by Reuters; editing by Guy Faulconbridge and Mark Trevelyan)