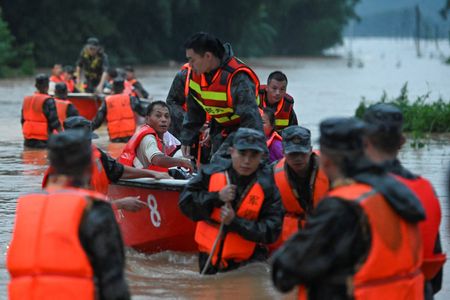 SHANGHAI/BEIJING (Reuters) -Heatwaves in northern and central China drove up electricity demand to record levels as millions switched on air conditioners to escape the sweltering conditions, while floodwaters in the south submerged villages and trapped city residents.

On Wednesday, China’s meteorological administration issued orange alert warnings for high temperatures in regions across the provinces of Shandong, Henan and Hebei.

Several cities in Shandong, China’s second-most populous province, have issued “red alert” high temperature warnings, which have pushed up demand for air-conditioning among the region’s more than 100 million people.

Temperatures in the regions were expected to hit above 40 Celsius (104 Fahrenheit) this week, according to the state weather forecaster.

Parts of Hebei, Henan and Shandong have faced drought-like conditions throughout June, as high temperatures arrived earlier this summer than in previous years.

As heatwaves baked northern and central China, heavy rain has been falling in seven provinces in the south, including Guangdong, the country’s most populous.

On Wednesday, 113 rivers in China flooded above warning levels, with seven above historical levels, state television quoted the water resources ministry as saying.

Residents in Yingde, a city in Guangdong where the flood warning had been upgraded to Level I, said on social media that water and power had been cut as the area flooded.

China has a four-tier alert system where Level I signals the most severe flooding.

“The water came very fast, and I believe many have not prepared foodstuff in their homes,” said a user on China’s Twitter-like microblog Weibo.

Stores have run out of staple foods like oil and rice as residents rushed to stockpile, a local resident told Reuters.

Yingde authorities have relocated some residents in the south of the city and advised others not to leave their homes.