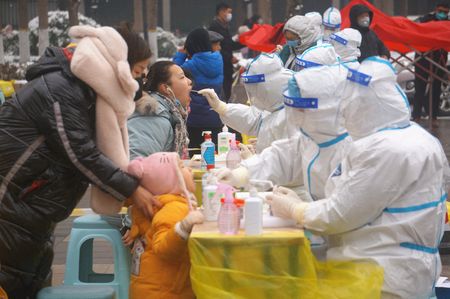 BEIJING (Reuters) – Central Chinese cities including Yuzhou and Zhengzhou imposed varying degrees of travel curbs after sporadic COVID-19 cases, in line with a national strategy that has taken on extra urgency as the Winter Olympics and Lunar New Year holiday approach.

The city of Yuzhou in the central province of Henan has ordered its 1 million residents not to leave town since Jan. 2, although the caseload for the city and the entire province remained tiny. Henan reported four domestically transmitted cases and 18 local asymptomatic infections for Tuesday.

China’s strategy demands that officials act to contain clusters of infections as quickly as possible.

Households in Yuzhou could only send one person to shop for daily necessities at designated venues every two days, and in high risk areas people were told to stay home and rely on deliveries, according to a government statement published late on Tuesday.

Local authorities warned that the COVID-19 situation for the city was severe, with the source of the virus still unknown, and demanded officials to treat virus control as “priority political task”.

In Xian, the northwestern city of 13 million that has been under lockdown for two weeks, authorities said case numbers were falling. There were 35 local symptomatic cases for Tuesday, a significant decline from 95 a day earlier and 150 or more per day during the Dec. 25-31 period, official data showed.

More than 42,000 people in Xian were in centralized COVID-19 quarantine facilities as of Tuesday, a city official said on Wednesday.

In Zhengzhou, the provincial capital of Henan province, people in risky areas were told they could not leave town without approval from COVID-19 control authorities, state television reported late on Tuesday. Residents in other parts of the city were advised against travelling out of Zhengzhou unless it was essential.

The overall virus situation in Zhengzhou, which is conducting a citywide test on its 12.6 million residents, is controllable, a government statement said.

Two counties in Henan, under the jurisdiction of Luoyang city and Zhoukou city, also sealed up a few areas.

Mainland China had 102,932 confirmed symptomatic cases as of the end of Jan. 4, including both local and imported ones.

There were no new fatalities for Tuesday, leaving the death toll unchanged at 4,636.