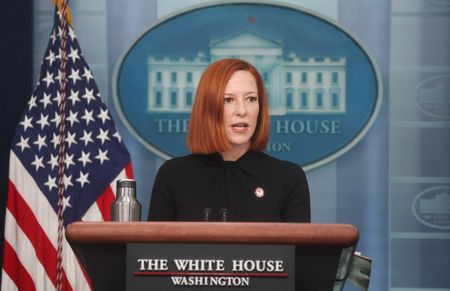 WASHINGTON (Reuters) -China’s use of a Uyghur athlete to carry the Olympic torch cannot be a distraction from “the human rights abuses, the genocide” committed against the Uyghurs, White House spokesperson Jen Psaki said on Monday.

A 20-year-old cross-country skier born in Xinjiang, Dinigeer Yilamujiang, along with another Chinese athlete lit the Olympic cauldron on Friday during opening ceremonies of the Beijing Winter Games.

“We can’t allow this to be a distraction … from the human rights abuses, the genocide that we’re seeing in parts of China,” Psaki told a media briefing.

“That is why we did not send a diplomatic delegation even as we’re cheering for our U.S. athletes,” she said.

The United States and other Western nations have imposed a diplomatic boycott of the Games over China’s treatment of Uyghurs and members of other Muslim minority groups in the Xinjiang region. The Chinese government denies the allegations.

Psaki was also asked about a comment last week by U.S. House Speaker Nancy Pelosi, who urged U.S. Olympic athletes to focus on competing and not risk angering the Chinese government by speaking out on human rights abuses.

“All athletes have the right to freely express themselves and that is the case in Beijing at the Olympics, it is the case anywhere,” Psaki said in response.