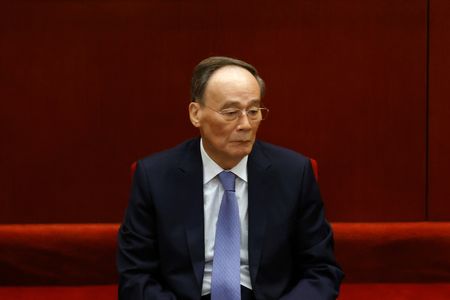 (Reuters) -Chinese Vice President Wang Qishan will attend Queen Elizabeth’s funeral at the invitation of the British government, the ministry of foreign affairs said on Saturday.

The BBC reported on Friday that the Chinese delegation nL8N30N155 visiting London for the queen’s Monday funeral would not be allowed to view her coffin at a lying-in-state vigil inside parliament.

Some parliamentarians had raised concerns about inviting representatives from China after several British lawmakers were sanctioned by Beijing for criticising alleged human rights abuses in Xinjiang. China denies any such abuses.

Chinese foreign ministry spokesperson Mao Ning said on Friday she had not yet seen the report but that “the state funeral of Queen Elizabeth II is an important event for the United Kingdom”.

Reuters on Thursday that Wang would likely attend the funeral for Queen Elizabeth https://www.reuters.com/world/uk/obituary-elizabeth-queen-who-moved-with-changing-world-2022-09-08/, Britain’s longest-reigning monarch, according to a British foreign office source.

(Reporting by Engen Tham in Shanghai; Editing by William Mallard)