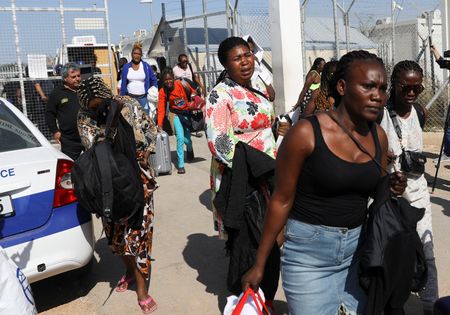 NICOSIA (Reuters) -Clashes broke out and fires were lit at an overcrowded reception centre for migrants in Cyprus on Friday, police and witnesses said.

Thick plumes of smoke rose over the Pournaras reception facility, some 22 km (14 miles) west of the capital Nicosia.

Witnesses told Reuters people from the camp had fled, running along a major road with their belongings. Police said individuals left the camp, which is not a closed facility, when the fires broke out.

Police said clashes appeared to have broken out between two groups in the centre. The fires were extinguished by the fire brigade but sporadic clashes continued until early afternoon, police said.

“A number of tents were burnt…the situation has now calmed down,” a police spokesman said. Some persons who sustained minor injuries were treated on site, and three people were taken to hospital for further examination.

Pournaras has been housing well over its 1,000 person capacity as Cyprus struggles to cope with an influx of asylum seekers from Syria and from African countries. The island has frequently said its capacity is at breaking point.

“Our country has taken on far more responsibilities and obligations proportionate to its size,” said Averof Neophytou, head of the ruling Democratic Rally party and a candidate for presidential elections scheduled early next year.

“The least we should expect is basic respect,” he said.

Many travel to the southern part of the island, controlled by the internationally recognised government of ethnically split Cyprus, through a buffer zone that separates it from the Turkish Cypriot-controlled area.

Authorities in Nicosia last week said this year alone, 17,000 people had entered their jurisdiction through irregular channels. There were 12,285 in the whole of 2021.