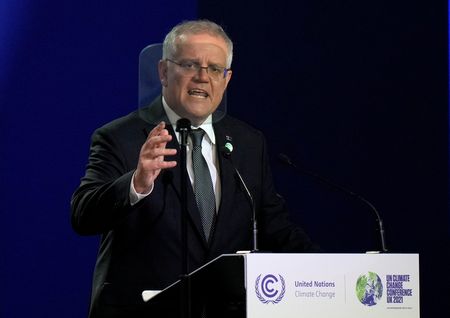 SYDNEY (Reuters) – Australia’s ruling conservative coalition on Wednesday looked to downplay internal debates over climate policy ahead of a national election to be held on May 21 after signs of division re-emerged over the government’s emission reduction targets.

Prime Minister Scott Morrison was forced to back the government’s emission targets after a member of the junior coalition partner claimed the global push toward net zero was “sort of dead anyway”.

“Everybody knows that Matt hasn’t been supportive of (net zero) position … that’s not his party’s position, that’s not the coalition’s position and it’s not the government’s,” Morrison told reporters on Wednesday. “There is no news there.”

Australia, the world’s top coal and a major gas exporter, in October adopted a target to reach net zero carbon emissions by 2050, but Morrison says he will not legislate the goal.

Morrison had to confirm his Liberal-National Party coalition government’s position on emissions on Tuesday after Colin Boyce, a Liberal party candidate in resource-rich Queensland, said there was “wiggle room” in Australia’s net-zero target.

Morrison needs the support of voters in coal and gas-producing regions, many of whom oppose strong action on climate change even though the wider Australian population backs efforts to slash carbon emissions.

While some coalition candidates in regional seats are talking down climate action, others in urban areas are talking up their climate credentials as they face strong challenges from independents who support lower emissions targets.

The opposition Labor party is ahead of the coalition, according to polls, although Morrison has extended his lead as the country’s preferred leader.

Centre-left Labor said the coalition was “in open warfare” about emissions policy.

“After apparently putting this war to bed over the last few months, it has erupted,” Shadow Resources Minister Murray Watt told ABC television.