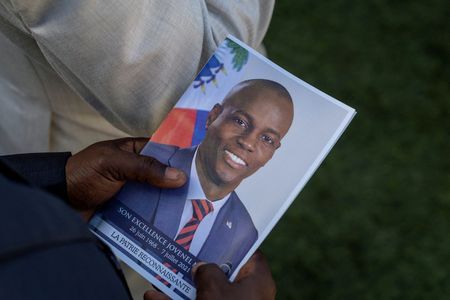 The suspect, Mario Antonio Palacios, 43, was detained during a stopover of a flight on which he was being deported from Jamaica to Colombia, the sources said.

Haitian authorities have accused Palacios of forming part of a mercenary group that assassinated Moise in July in an assault on his residence, during which his wife was also wounded.

Palacios was detained during a stopover in Panama and asked to “voluntarily” board a flight to the United States, a Colombian immigration source said.

In case he resisted, Panamanian officials said they would enforce an Interpol red notice issued by the United States, which is in addition to one that Haiti had already issued, the source said.

Haiti has also issued an Interpol red notice for Palacios.

It was not clear if he had gone to the United States.

Panama authorities have issued no public comment on the affair but a person familiar with the matter in Panama confirmed that Palacios had been detained.

A video shared with Reuters by the source, who declined to be identified, showed two immigration agents escorting a man, whose face was not shown, through what appeared to be Panama’s airport.

A lawyer for Palacios had no immediate comment. Interpol did not immediately respond to a request for comment.

(Reporting by Luis Jaime Acosta in Bogota and Milagro Vallecillos in Panama City; Additional reporting by Gessika Thomas in Port-au-Prince and Kate Chappell in Kingston; Editing by Robert Birsel)