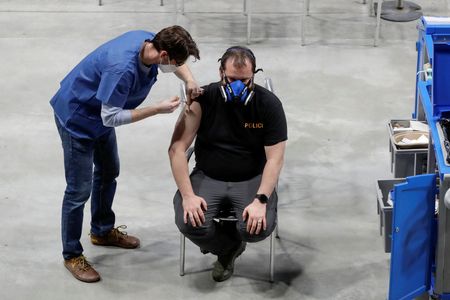 The Czech Republic’s new government, in office less than a month, plans to cancel a mandate planned by the previous administration for at-risk groups which is yet to take effect.

But it has not decided on another previously planned mandate for the roughly 56,000 emergency and rescue service workers.

“What makes me angry about this situation is that we have been working for days on end in the past two years, we have neglected our families … and we are threatened with being fired,” nurse Eva Peterkova said on Tuesday at a news conference alongside other petition backers.

The initiative had 4,664 signatures from police, fire and rescue workers as of Tuesday after several days. They say vaccination should be a personal decision.

The Health Ministry said on Tuesday it planned on making a final decision on the order by mid-February.

Czechs have seen daily COVID cases drop since the latest wave reached a peak at the end of November, but the country of 10.7 million is yet to face significant numbers of the new, more contagious Omicron variant.

Policymakers around the world have faced challenges to vaccine mandates. Austria was the first in Europe to make the shot mandatory for its population, prompting protests.